Will the audience change history by admiring ‘Raavan’? Ganesha finds out

Mani Ratnam behind the screen and Abhishek Bachchan on the screen are all set to create magic with a special piece of work- ‘Raavan’. Slated for release on June 18, the film marks the reunion of Mani and Abhishek after hits like Yuva and Guru. Post marriage, this will be Abhi-Ash’s first film together, and it is obvious that people are curious to see the on-screen chemistry between the real life couple. The film also stars Vikram Kennedy (popular Tamil actor), Govinda and Ravi Kishan. If pains indeed lead to gains, and if daring stunts be the rating scale, Raavan will definitely score high considering Abhishek’s and Aishwarya’s stunts in the film. The icing on the cake is Rahman’s music and Santosh Sivan’s cinematography.

While Raavan, the mythological character is considered as a demon in India, he is worshipped as God in Sri Lanka. How will Raavan, the film fair at the box-office? Will it face the ire of people or will it be admired by the audience? Ganesha finds out with the help of Vedic Astrology. 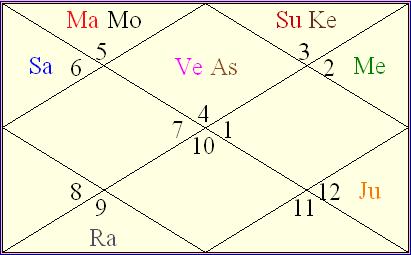 May Raavan be the turning point in the careers of the cast and crew of this film, wishes Ganesha.