Will Shahid study at the ‘Vidyalaya’ or settle at Sania’s Court? 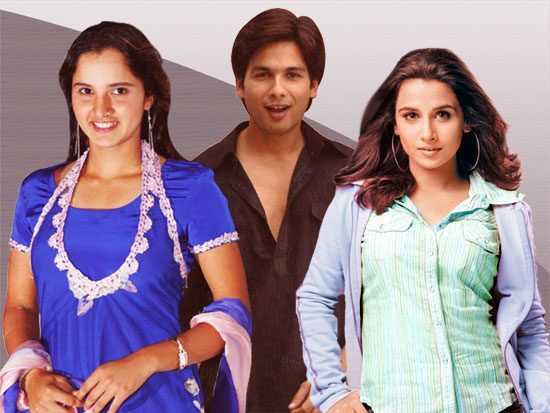 Introduction: Shahid Kapoor is the actor who was in news till recently due to his affair with the actress Kareena Kapoor. Kareena was, reportedly, not much disturbed due to the subsequent break up of this relationship and witin a short period only got hooked to Saif Ali Khan. While Shahid moved on. The gossip machines are oiled with the rumors that Shahid is on good terms with both Vidya Balan and Sania Mirza.

Ganesha uses Indian Vedic astro analysis on the Sun Charts of all the three of them to predict their future because their full birth details are not available.

Vidya has Sun in Sagittarius which is sextile to Shahid’s Sun and that makes them good friends and amicable with each other. Vidya has Venus in Capricorn and Mars in Virgo. Both these planets are Earth signs and in trine to each other, providing her beauty and nature.

Sania has Sun in Libra along with Venus and Mars in Capricorn. Mars has provided her, not the beauty of the proportions and magnitude that Vidya has, but energy. Her innocent looks though are attributed to Venus in Libra.

Ganesha finds that as Sania’s Venus is trine to Shahid’s Sun, Venus and Mars, Shahid will find himself comfortable with her and she may be his choice.

Shahid seems to be physically attracted to Vidya as his natal Mars aspects Vidya’s Mars, though its an in-conjunct aspect. The other reason for his attraction for her is that she has Venus in Capricorn which is Saturn’s other sign and Shahid has Venus and Mars in Aquarius, Saturn’s sign. Thus their physical attraction benchmarks are similar which may lead Shahid to get attracted towards her but finally Ganesha feels that he will choose Sania.

Ganesha wishes all the three a very good life.