Will Ruby Henson mirror her parents or will she tread her own path? 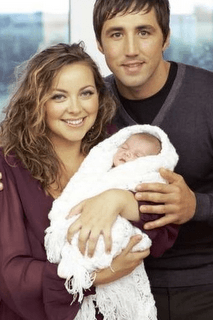 Ruby Henson is the lucky daughter of the celebrity couple, Gavin Henson, Welsh rugby player, and Charlotte Church, a Welsh singer. Like all celebrity kids, people are concerned about what Ruby will choose as a profession and whether she will take to her mom or pop?

So is Ganesha concerned too, and thus he made a comparative study of the three horoscopes (Vedic Sun sign horoscopes) as Charlotte’s and Gavin’s birth time are not known.

Gavin has Guru in the tenth house of career. Guru is the lord of Sagittarius (sign of sports). Sukra the lord of his tenth house of career is in the ascendant in Capricorn. Capricorn is a sign of feet, which are very much needed for sports. Sukra is in Capricorn in the Navamsa chart too. Further Gavin has a stellium (congregation of more than two planets in a single sign), in Capricorn. Also he has 5 planets in movable signs, and sports need mobility, a lot of it. So one thing was sure for Gavin, that he would be in some profession related to Capricorn, movement and speed. He thus selected sports.

Charlotte, has Mangal as the lord of her tenth house of career, who is Swagruhi (in own sign) in the tenth house. In the Navamsa chart it is Sagittarius. Mangal is in conjcuntion with Shani in the natal chart, these planetary positions have a notation that Charlotte should be in some Martian or technical profession. Then why did she choose singing? Well, Sukra the signifier of this profession is powerfully placed, as it becomes the lord of two important houses, the fourth and the ninth and is in the ascendant, trine to its own house, making it a planet which has more influence in Charlotte’s life. Mars as the career lord and Sukra as the influential planet are in a tight applying orb, thus she chose Sukra as the nature of career and Mars lead her to name and fame.

Does their daughter Ruby have anything of this sort? Ganesha provides a detailed view on that. Ruby has four planets in fixed signs, four planets in Mutable signs and one planet in Movable sign. So there is a tendency of balance between choosing mental activity related professions or movement and speed related career. Shani the lord of her tenth house of career is placed in a fiery sign of fixed nature. It is in the sign of communication in the Navamsa chart. This leads Ganesha to think that she may not be in sports. There are no influences of Sukra the prime signifier of the singing or entertainment profession in her horoscope. Shani is the influencer in her chart as it is the lord of the ninth house and tenth house, placed in an angle (Kendra).

Summarily there is much of diversity in Ruby’s horoscope when compared to both her parent’s horoscopes and there is not a single drop of similarity. This rather compels Ganesha to be of the opinion that Ruby may choose a kind of profession which is balanced and neither too soft nor too sporty, very much different from what her parents are into.