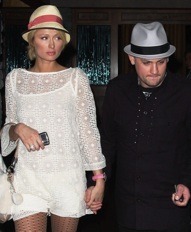 Paris Hilton is the name which shrugs an introduction. She is an American celebutante, singer, actress, model, and businesswoman, best known for her television series, The Simple Life. This Hollywood model/actress has recently declared that she is experiencing the magic of love and is on cloud nine. The man behind her happiness is none other than Benji Madden – twin brother of Joel Madden. Ben and Joel both are part of American Pop Rock band ‘Good Charlotte’.

Paris Hilton did not have to do much to be in limelight. She came into limelight only after her ‘sex-tape’ with Rick Salomon, Pamela Anderson’s current beau, was released. Now Paris has hooked up with Benji and she seems to be very happy with him. There are bets and votings on this affair. Amidst all these, Ganesha studies Paris and Benji’s horoscopes with the help of Vedic Astrology and Sun Sign, to check longevity of this relationship.

Ganesha observes that Paris’ Sun Sign is Aquarius and Benji’s is Pisces. From compatibility point of view, this is very average match as both the Sun Signs are in 2:12 ratio. Why Paris and Benji are attracted to each other? Well the answer is very simple. Paris Hilton’s Venus is in Capricorn and so Benji’s Venus too! Venus in Capricorn makes person desperate and possessive in case of love and related matters. However, it also teaches many things which one has to learn with efforts. That’s the case with Paris and Benji. Both have Mars in Aquarius so sexual desires and drives are equally strong at both the ends. Ganesha notes that Benji’s retrograde Jupiter falls on Paris’ Moon and Rahu. This is why Paris is feeling very happy and ‘lucky’ to be in love with Benji.

Although both have Venus in the same sign and Mars too in the same sign, Ganesha finds the time between 1st May 2008 to 17th November 2009 to be highly difficult for the couple while Rahu transits through Capricorn over Paris and Benji’s Venus. Ganesha feels that despite good potential of going ahead with this relationship this couple may be prone to disruptions, misunderstandings, mistrust and estrangement in the said period.

Good luck and may Lord Ganesha bless Paris Hilton and Benji Madden with happiness in this relationship.