Will No one killed Jessica finally break the jinx? Ganesha finds out

The most awaited film of 2011, No One Killed Jessica is all set to hit the silver screen on 7th January. Based on a real life murder that literally rocked the nation and the capital, New Delhi, the film boasts of the presence of two of the industry’s most revered actresses of today- Vidya Balan and Rani Mukherjee. The film showcases the 11-year-long legal struggle that ensued the famous Jessica Lal case. Directed by Rajkumar Gupta, there are a lot of expectations from the film, as his first film, Aamir, was a critically acclaimed, thoughtful film. The producers have not left any stone unturned in promoting this latest offering, No One Killed Jessica, too. The teasers and promotions of the film have been titillating the audience since long
now. And, with such powerful actresses playing the lead, the audiences’ expectations and hopes are quite high.

Apart from Dabangg, there has not been a single hit in 2010. Will No One Killed Jessica break the jinx? Ganesha finds out with the help of Vedic astrology. 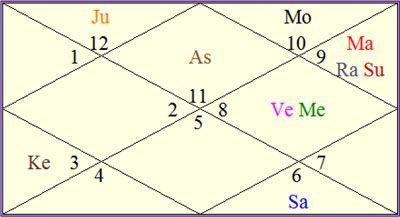 Good luck and may Lord Ganesha bless the cast and crew of this film.