Born in the first family of Bollywood – ‘The Kapoors’, there is no doubt that Karisma Kapur was born with a silver spoon. At a tender age of 16, she decided to break the rules set by the Kapoor ‘khandan’, and became a Bollywood actresses. Lolo went on to pursue her starry dreams in the glamour world. After her first film Prem Quadi bombed at the box-office, Karisma went an extra mile to prove her mettle, and working hard on her looks and acting skills, she bagged the tag of being one of the finest actresses of the last decade. She worked in many commercially and critically acclaimed films like Raja Hindustani, Dil To Pagal Hai, Fiza and Zubeidaa and also received many awards. After link-ups with Ajay Devgn and Abhishek Bachchan, Lolo finally chose a Delhi-based industrialist, Sanjay Kapur as her Prince Charming, and married him in 2003. Though there were talks about her marriage hitting rock bottom, everything seems to be fine as of now. She made a comeback on small screen in 2008, as a judge to a reality dance show.

Karisma now tops the list of celeb-moms of tinsel town by playing full time mother to Samaira and Kiaan. Will she continue to carry forward the legacy of the Kapoors on 70mm or will she happily play mom to her kids? Ganesha finds out with the help of Vedic Astrology. 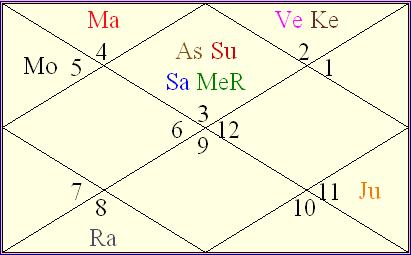