Will ‘Anjaana Anjaani’ find the road-map to success? Ganesha foretells 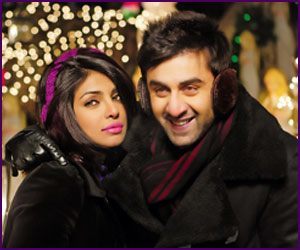 -Fasten your seat belts, and get ready for the thrill as Anjaana Ranbir Kapoor and Anjaani Priyanka Chopra are just round the corner, ready to whisk you off on a journey of cinematic pleasure and adventure. The two heartthrobs are all set to woo and entertain the audiences with their latest romcom ‘Anjaana Anjaani’. Coming from director Siddharth Anand, whose previous films like ‘Salaam Namaste’ and ‘Bachana Ae Haseeno’ had an instant connect with the youth, the film is bound to be much awaited by the young and young-at-heart across the world. The eye-ball grabbing promos of the movie have inspired many youngsters who have already started sporting Priyanka’s grungy look and Ranbir’s cool attitude.

This quarter of the year has not really been auspicious for the film industry, barring one or two surprise hits. That’s the reason people have a lot of expectations from ‘Anjaana Anjaani’, which is releasing on 24th September, 2010. Will the film withstand the litmus test? Ganesha finds out with the help of Vedic Astrology.