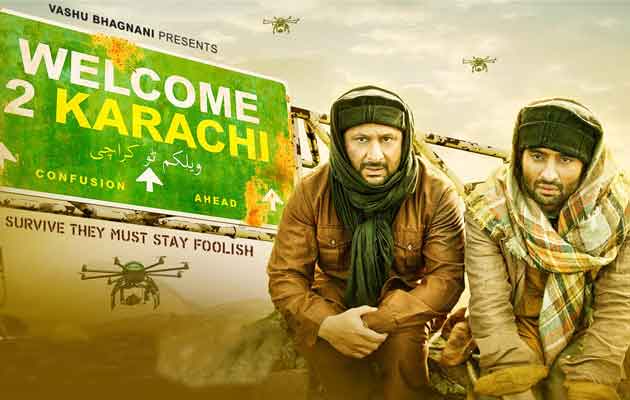 Named after India’s favourite neighbour Pakistan’s Southern port city Karachi, the soon to be released action comedy Welcome 2 Karachi stars Arshad Warsi and Jackky Bhagnani in lead roles, along with Lauren Gottileb as the female lead. The fun comedy, known to have been inspired from Hollywood blockbuster Dumb and Dumber, the film Welcome 2 Karachi was shot extensively in the UK and at the sets, created to resemble the landscape of the city of Karachi. Produced by the male lead Jackky Bhaganani’s father Vasu Bhagnani, the film encountered various roadblocks during its making, specifically when the actors of the movie were mistaken as the real Taliban people and the Scotland Yard stalled the shooting for a while. Since the backdrop of the movie is controversial, the film is expected to court trouble, yet the teasers and music have caught the eye of the audiences. Here, Ganesha predicts the box office fate of the film Welcome 2 Karachi. Read on.

Ganesha wishes good luck to the cast and crew of the film ‘Welcome 2 Karachi’.