‘Wazir’ will enjoy a thunderous opening; Hard-hitting performances will be the film’s USP! 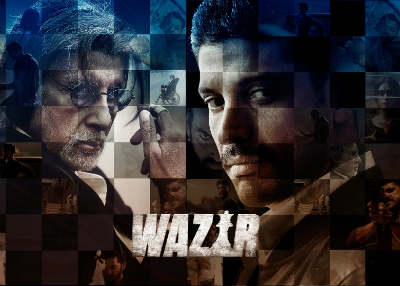 Ganesha predicts a great cinematic experience for the viewers and also great critical acclaim for the ambitious Vidhu Vinod Chopra project!
A film which boasts of an incredible starcast, power-packed performances, mind-blowing thrills and a lot more, ‘Wazir’ is one of the most anticipated films and promises to be a film that will give us a good start to the filmi journey in 2016! Produced by the ace film-maker Vidhu Vinod Chopra and directed by the super-talented Bijoy Nambiar, the film will be starring Amitabh Bachchan, Farhan Akhtar, Aditi Rao Hydari, John Abraham and Neil Nitin Mukesh. There has been a lot of gossip and buzz about the film already doing the rounds, but what picture do the stars portray? Let’s find out with the help of Ganesha’s astrological analysis!

Wazir’s moves in the Foreign Lands…

Scoring even with the critics?