Warm Birthday Wishes to Arshad Warshi from Ganesha, in advance 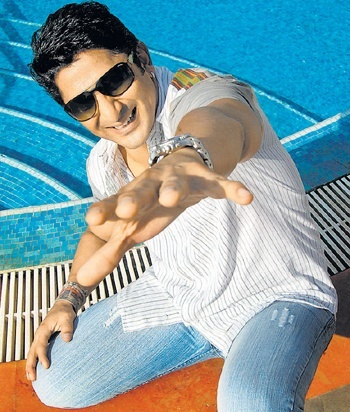 His ‘Betabi’ for success made him watch ‘Tere Mere Sapne’. On ‘Sunday’ with the help of ‘Munnabhai MBBS’ he caught the ‘Kabul Express’ and reached his ‘Goal’. He has attained success with sheer hard work and dedication and there is no ‘Golmaal’ in it.

You are faultless in guessing that he is none other than ‘Arshad Warsi‘, who gave a remarkable performance as `Circuit` in movie Munnabhai MBBS. Born on April 19, 1969, with Sagittarius Moon sign, he is noted for his quick, sharp mind, extraordinary insights and an ability to get things done. We all wish him a wonderful Birthday and wish that may this year bring with it all the success and fulfillment his heart desires.

On this joyous occasion of his birthday, Ganesha wants to gift him with the prediction about his future. Due to unavailability of his birth time, Ganesha has given this prediction based on Surya Kundali.

Looking at his Sun chart, Mars conjunct Sun, both are fiery planets give him powerful energy. He is competitive and tends to enjoy challenges and opposition. The powerful Sun in his chart makes him popular. So he hosted a popular award show Sabse Favourite Kaun for Star Gold. He is also the host of Bigg Boss, the Indian version of the reality television series Big Brother on Sony Entertainment Television Asia. He has made a mark for himself in the small screen as well. Venus, the signifier of acting as well as modelling, is in exaltation. Thus, he is most popular comedian in Bollywood movies. The conjunction between Mars and Sun makes him strong-willed and passionate. Jupiter is trine aspect with Moon denote luck in life. He attracts good things with a positive frame of mind and a charitable disposition. As this harmonious aspect he is usually well-received, helpful, and well-informed. All the planetary position indicate that he is positive hearted with strong morals and much faith in life. The conjunction between Mercury and Venus makes him jolly and charismatic. Because of this conjunction he can perform as a good comedian.

The trine aspect between Sun and Jupiter is the indication that his life will be protected and guided and that luck can lead him on the path to good fortune. However, the challenge is that he must fully use his qualities, talents and natural gifts in order to expand his skill.

Growth and self-development will occur during this year. Current year would be encouraging for him. He is in an improving phase of his acting career and is nowadays interested in doing only those films, which appeal him. Considering all the planetary transits of current year, Ganesha views that he shall have better planning to build financial strength. Ganesha feels that he may accept some more offers of big banners in films. Currently his Moon is under the positive influence of benefic Jupiter. He may travel frequently or more than usual at least, during this year. Ganesha notes that from May 09, 2008 to September 11, 2008 is favourable period for matters related to career progress.

Ganesha wishes him a Happy Birthday and hopes that he reaches the zenith of his acting career through his ability.