Why’s ‘Udta Punjab’ ‘Burning’ And not ‘Flying’? How Long Will The Kashyap-Nihalani Battle Continue? 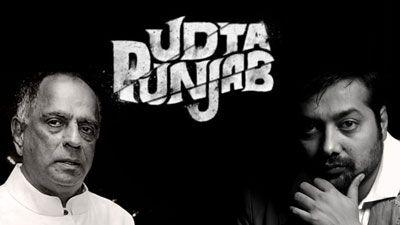 Unconventional, rebellious and free-thinking are some of the terms, which can perfectly justify the spirit and wonder of Anurag Kashyap – who is fighting with his tooth and nail to deliver the Shahid Kapoor starrer – ‘Udta Punjab’ to the masses. His battle with the CBFC and especially Pahlaj Nihalani, has now almost become a daily staple for the news factories to write and speculate about! Kashyap, who has always been known to have gifted the audiences with hard-hitting and out-of-the-box films, has been saying that this film, which talks about the drug menace in the state of Punjab, is a very ‘honest’ film. But ‘Udta Punjab’ has unfortunately earned only a plethora of controversies over its profanity in dialogues. Slated for a 17th June, 2016, release, the film is co-produced by Anurag Kashyap’s Phantom Films and Ekta Kapoor’s Balaji Films. It also stars Kareena Kapoor Khan, Alia Bhatt, and Diljit Dosanjh – whose presence as a cop could very well be the reason for the alleged political pressure to censor certain elements.The matter assumes greater significance as Punjab Assembly elections are due in 2017 and the opposition Congress and Aam Aadmi Party are blaming the ruling Akalis for the growing drug menace. The review committee of the Central Board of Film Certification (CBFC), which earlier suggested 89 cuts in the film over liberal use of expletives in the dialogues, is now seeking to delete the word ‘Punjab’ from its title. What is going to be the end result of this tumult in the film circuit? Who will emerge victorious – ‘Udta Punjab’ or the CBFC?

The Stars Speak – Anurag Kashyap and the Astrological Picture
Anurag Kashyap was born with Surya Mangal Angarak Yoga and that too in the Leo sign. It indicates a fiery approach with extraordinary leadership qualities. Due to this combination, we can say that – the man is a leader and not a follower! Saturn is in Taurus in his chart, in square with Natal Sun.Saturn signifies justice, discipline, etc. Currently, the transiting Saturn is in Square with his Natal Sun, Mars and Mercury, plus it is in opposition to Natal Saturn. This is giving him hard times and also making him seek justice.

Fate of ‘Udta Punjab’ – Will the release get delayed?
Ganesha feels that there may be some positive development related to the film post 14th June, 2016. However, considering the larger picture, things related to ‘Udta Punjab’ may take more time to get settled, and some matters may get extended till 13th August, 2016, as the transiting Saturn is retrograde. With Sun’s transit in Leo in August, Anurag is likely to have things in his favour, but there will be a need for compromise from Anurag’s side (his production house’s side), or otherwise things are not likely to get sorted out, mainly due to Saturn’s adverse transit.