Teraa Surroor may prove to be a mediocre entertainer; It’s Music may be one of the bright spots… 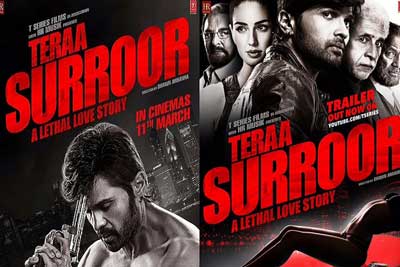 Himesh Reshammiya – Indian Cinema’s very own maverick is back again with Tera Surroor – a sequel to the 2007 sleeper hit Aap Kaa Surroor. This film will also be starring the Dutch-Indian model Farah Karimaee along with Naseeruddin Shah, Shekhar Kapur, Kabir Bedi, Monica Dogra in supporting roles. The man who made the nation swoon to his famous compositions like Tera Tera Tera Surrooor, Tera Mera Milna and other famous tracks from the prequel, now promises to blow our minds with high-octane action and thrills in his upcoming next. Produced by the HR Musik Limited and T-Series, the film is all set to hit theaters on the 11th of March, 2016. Let’s find out what the stars indicate about the film’s prospects at the Box-Office.

Music – one of the few bright spots?

Performance of the supporting cast:

Himesh to face the heat…

Ganesha Concludes that…
… In short, Teraa Surroor is not going to perform too well at the Box Office! The storyline of the film is likely to be unimpressive and this may kill the audience’s interest and enthusiasm.