Teen Patti to play against the odds, says Ganesha Teen Patti, an upcoming film based on a game of flush that involves great skills, guts, thrill, money and chance, has all the ingredients that makes the game so popular. It has acting stalwarts like Sir Ben Kingsley and Amitabh Bachchan in the lead role, and involves some of the best Indian and oversees talent in the film-making business today. The film is a new-age mainstream-meets-offbeat drama and promises to cater fresh cinematic experience for the film buffs, who are used to the run-of-the-mill love melodramas.

Going by the promos, the film comes across as one of those calculated risks that are bound to be money spinners, provided the director hasn’t missed the trick or the luck doesn’t decide to play the villain. Ganesha uses the Vedic astrology system to take a look at the chances of Teen Patti hitting the jackpot at the Box Office. 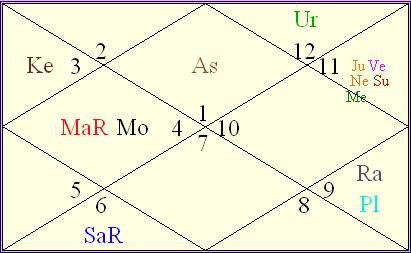 Astrological Observations
Ganesha notes that Lord of the Ascendant Mars is retrograde and is with Swagruhi Moon so in Neech Bhanga state.

Astrological Predictions
Despite having good star cast, the film may have average start at box office as Lagnesh (Ascendant Lord) is debilitated and is in retrograde motion. But since it is placed with Moon and is in Neech Bhanga Raj Yoga, those who watch film will spread the word around (Moon signifies eyes) and the film will gradually pick up in business.

This film may have to face a bit of competition at the Box Office as 7th House Lord is placed with the 6th House Lord in the 11th House of gains.

Rahu in the 9th House of luck may elude ‘Teen Patti’ from great success at box office so Ganesha doesn’t expect this film to be a block-buster however, this film may do considerably well due to seventh house Lord’s position in the 11th House of gains.

The film may do satisfactory business despite average start at box office because there is planetary stellium in the 11th House of gains.

Direction may be good and dialogues may also be delivered well as Mercury and Jupiter both are in the 11th House. The film may also have some hidden message for the audience but it may not come out too clearly.

Performance of the actors may be good but somewhere (as there is a stellium in the 11th House), there may be lots of things story writer and director of this film would want to convey which will scatter the story-line of this film a bit.

From business point of view, Ganesha believes that it may do slightly ‘better than average’.