Tamasha Shall Open to Packed Houses, but may experience a slow run post the 2nd Week… 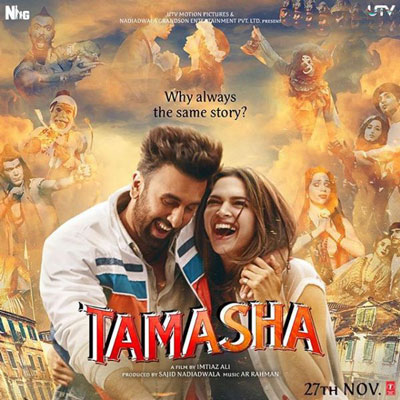 Get prepared for an amazing Ranbir-Deepika ‘magic-show’ once again, they will capture your imagination!
Even the thought of Ranbir Kapoor and Deepika Padukone together brings great joy to the mind, as their jodi is one of the best in the business and a recent online survey has even touted this pair as the next SRK-Kajol! The sensuality, sizzling chemistry stemming out of natural instinct, the life and colour that they bring to the screen and the overall spark of this pair is one of the most adorable things in Bollywood, and any film-enthusiast would agree with this! We saw the magic of this pair in its most attractive and delightful form in Yeh Jawaani Hai Deewani and we literally fell in love with the beauty of Naina (Deepika) and Bunny’s (Ranbir) adorable bond! We will be able to witness this amazing jodi and their class act again on the big screen in the upcoming Comedy Drama film ‘Tamasha’, and the man at the helm of affairs for this movie is Imtiaz Ali, the director with whom Ranbir has already worked in Rockstar and Deepika in Love Aaj Kal! With the tagline – ‘Why always the same story’, Tamasha promises to be a fresh and enjoyable love story. Shot in France, Shimla, Delhi, Gurgaon, Kolkata and with some parts being filmed in Tokyo, the movie also looks set to enchant us with its visual appeal. The sound-tracks of the film have already received phenomenal response, but how shall the movie fare at the Box-Office? Check out the exclusive Astro-Preview!