Spotlight may beam on the action-man Sunny Deol post May 2013, feels Ganesha.

Spotlight may beam on the action-man Sunny Deol post May 2013, feels Ganesha.

Sunny Deol, aptly called the action king of Bollywood, is the son of Bollywood’s legendary actor Dharmendra. Known for his action packed, volatile performances like those in the blockbusters such as Damini, Ghayal and Gadar: Ek Prem Katha, he has mesmerised the audiences with his power packed performances. Sunny Deol has won two National Film Awards and two Filmfare awards. Sunny Deol made his début opposite Amrita Singh in Betaab in the year 1983. His portrayal as a Sikh truck driver Tara Singh who falls for a Muslim girl in the moive Gadar:Ek Prem Katha went on to become an epic performance. The movie itself, an all out blockbuster and one of the highest grossers, won rave reviews, and that surely would not have been possible without Sunny’s magnetic dialogue delivery. Sunny Deol has also tried his hands as a producer and a director. He continues to be a prominent Hindi film actor. On his 53rd birthday, Ganesha looks at his natal chart to find what lies ahead for him. 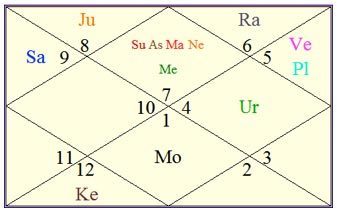 On the whole, Sunny Deol’s time ahead looks good, especially post December 2012 and even better after May 2013. That is when his career may gain momentum again. Ganesha wishes him well.

Ganesha wishes him many happy returns of the day.