Singer Boy George appeared in a London court charged with the false imprisonment of a male escort. He is accused of chaining the 28-year-old male escort to a wall in his London home on April 28 this year. Ganesha looks into his Lagna Chart to find out the reasons behind this act. 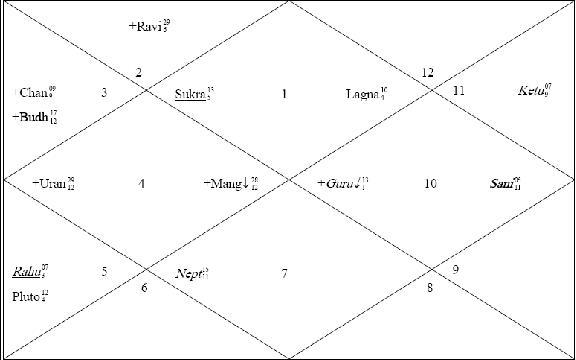 He has fiery Aries Ascendant and the Lord of Ascendant Mars is placed in the 4th house in debilitation. Sun is the Atmakaraka planet and Karakamsa becomes Virgo. Moon and Mercury in the 3rd house (house of expression) in Mercury’s sign give him very expressive and emotional voice. Moon and Mercury in the 2nd house from Atmakaraka are also good
for singing profession.
Being born in Aries Ascendant and Mars in debilitation in the 4th house in opposition with Saturn, he may be enterprising and ambitious and may dislike being guided by others, intense when interested, vehement when excited. He can be rather stubborn but often frank, quick tempered, resent imposition and is liable to go to extremes. Venus is placed in the Aries in opposition with Neptune making him pleasure seeking and drawing him to use of Drugs as well. On October 7, 2005, Boy George was arrested in Manhattan on suspicion of possessing cocaine. He was then under the influence of Saturn-Rahu period and Rahu is placed in square with Sun. Sun-Rahu square always create one or the other legal issues. On June 17, 2006 and again on August 14, 2006 he appeared in court facing legal charges. So he has been constantly facing legal issues in this Rahu’s Bhukti in the Saturn Mahadasha. He is passing through a difficult period which will continue to create legal problems till September 2008.

George, who did not enter a plea, will appear again at Snaresbrook Crown Court on February 25 next year. He will be under the influence of Saturn-Rahu-Sun period at that time which seems extremely difficult for him. The transiting Sun will be placed with transiting Rahu in exact opposition with transit Saturn, which is really looking problematic for him. He might get strict verdict against him and imprisonment seems very obvious.