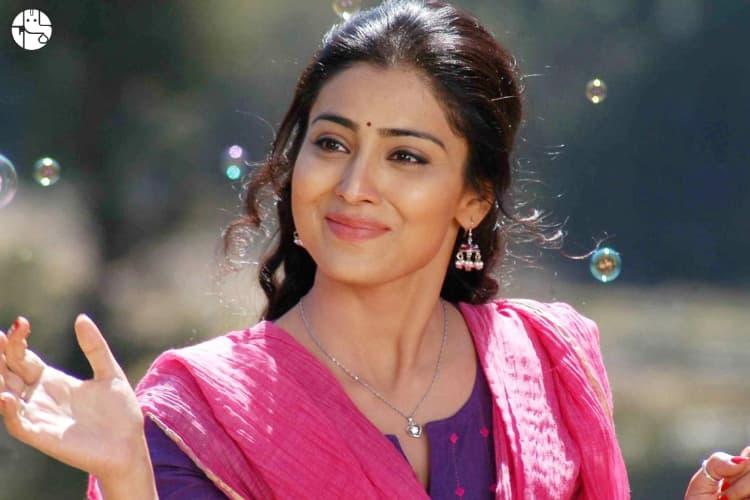 Shriya Saran's journey has been really exceptional from dancing to modelling, to acting and eventually to American Cinema. She is the talented Indian-American actress born in the winter capital city of Uttarakhand, Dehradun. Before moving in the unusual realm of acting. She was a well-known dancer. In 2001, her Guru dance master gave her the growing opportunity to play a role in a music video "Thirakti Kyun Hawa", which brought her into the eyes of many established filmmakers.

The actress started her thespian journey in 2001 with the Telugu film Ishtam. Unfortunately, it was not well received but her second movie Santhosham, in the second year of her career made her a commercially successful actress. After that, there was no end for her to gain prevalence as an eminent actress. She appeared in many Telugu, Tamil, Indian as well as in American films like The Other End of the Line.

Shriya has been awarded many accolades for her performance, especially for her highest-grosser Tamil film Sivaji with Rajinikanth. Her Bollywood fans will remember her from Awarapan, where she played a soft-spoken, innocent love-interest to Emran Hashmi and won many hearts. Most recently, she was seen in the Hindi version of one of the best suspense thrillers of Indian Cinema, Drishyam. Her role as a mother who stood by her daughter first, and then with her family in trying times was commendable. The audience could connect with her at ease as it was relatable to many.

In addition to her remarkable performances, she has also been a brand ambassador of many popular brands across India, endorsing health and beauty products.  Apart from that, she opened a spa that exclusively employs visually challenged people in 2011.

Looking at her journey, it really needs a lot of determination and discipline to acquire all the fame and acclamation which she is enjoying right now, and her zodiac sign Virgo has all those traits. Not only that, but she might also have many more achievements still stored in her future. So let's unfold what her future holds according to our expert astrologers on her birthday. You can also consult our experts to reveal your prospects and get one stop solution.

What does Astrology say About Her Future?

According to her birth chart, she is born with defining personality traits, discipline, and will power which make this talented and beautiful actress conquer all the challenges. Due to that reason, many high profile names from the industry may seek to work with her. Jupiter is also indicating the enhancement of her skills and creativity. An expansion in the number of people she works with is also predicted. In the near future, she may come across many worthy projects in her life for which she is suggested to be careful. As they say, everything that glitters is not gold. Some projects that might fascinate her at first glance may lead her to some legal-disputes.

Astrological Predictions Based On Transits

The transit of Jupiter with Saturn in Capricorn may be giving her a clue to seek advice from some learned and experienced people of the industry, before making any life-changing decisions. All in all, she may find some success with any ongoing including her existing legal proceedings.

As Shriya moved in her career and gained name and fame with her endearing personality and outstanding qualities, similarly, you too can achieve in your life by unlocking your hidden traits instigated in your Personalized Janampatri since the beginning of your life.

A Little Piece of Advice

She will achieve more in this period if she thinks of some necessary break from her work and occupying herself in practicing some yoga or meditation. Though we totally agree that she is gorgeously fit, watching out on her diet that includes fruits and veggies, the intake of ayurvedic ingredients like Tulsi, Ginger, Lemon, and Turmeric may keep her health in the top-notch condition.

Believe it or not (we don’t), Shriya will be celebrating her 38th birthday on 11th September. We wish her all the best for her upcoming projects and her endeavours on the personal front. May Ganesha bring her all the joy and prosperity in 2020-21 and beyond.

This is all about Shriya’s life and the challenges she faced during her journey. Astrology is the best way to gain some insight about our imminent life and set goals according to that. You too can choose astrology to find out some flashes into your life and plan accordingly, or you can access your Personalized 2020 Yearly Report to know opportunities and challenges this year has in store for you.