Shreya Ghoshal to keep mesmerising the nation with her velvety voice, predicts Ganesha

With a velvety voice, she has cast a magical spell over the entire nation. She is the queen of melody, who rules the hearts of young India. You guessed it right! We are talking about the very charming singing sensation, Shreya Ghoshal. Shreya started accompanying her first Guru, her mother, on harmonium at a tender age of four. No one even thought, when little Shreya was declared the winner of singing reality show Sa Re Ga Ma Pa, that this young singer would, one day, take the nation by storm. But she did! Then, as an adult, she participated in one more season of Sa Re Ga Ma Pa. And this time, the show opened for her the doors to bollywood, as her beautiful voice caught the attention of Sanjay Leela Bhansali, who later offered her the opportunity to sing for his Paro in Devdas. Since then, there has been no looking back. She has belted out numerous chart-busters in not just Hindi but also many regional languages.

The youth icon, Shreya is celebrating her 27th birthday on 12th March, 2011. Do her stars offer her a melodious year ahead? Ganesha finds out with the help of Vedic Astrology. 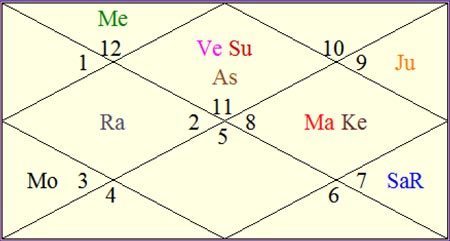 Good luck and may Lord Ganesha bless Shreya Ghosal with a great year ahead.