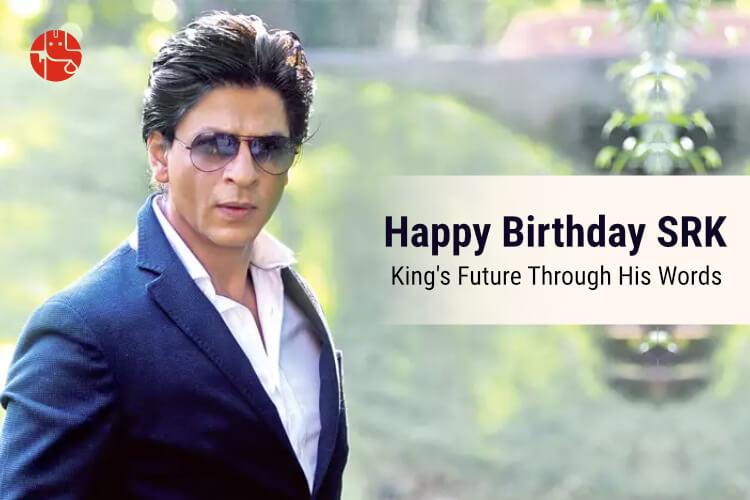 
These words of Gaurav, his fictional Jabra fan, resonate the sentiments of many! An epitome of superstardom, Shah Rukh Khan has seen the heights of an actor’s career which many of us could only dream of. Though the second richest actor in the world can have all his Mannats fulfilled on a whim, this King of Bollywood does not seem to have any plans of k..k..k..k...curtailment!


Coming from a middle-class family to this ‘Baadshah-hood’, the journey has been a fairy tale that keeps on giving. He has been, over the years and even today, the perfect example of an outsider ruling the industry like it was never done before, on his own terms. Perfectly described by his suave dialogue from Don 2:


Maybe only someone who wins 14 Filmfare awards gets to say lines like this. And another 30 Filmfare nominations; a Padma Shri; Ordre des Arts et des Lettres and Légion d'honneur by the Government of France; two Morrocan; two Malaysian; and Goodwill Ambassador award from South Korea. Throw in an honorary Black Belt in Taekwondo from South Korea! Yes. A Black Belt. Don’t Underestimate the Power of a Common Man, we suppose.


If you haven’t noticed by now, we are big fans of his dialogues. Prolific Quotes, Words of Wisdom, just little nuggets of knowledge. Sometimes hilarious memes, sometimes stories on their own. As he turns 55 on 02nd November, we, more overwhelmed than Kaveri Amma, bring you Shah Rukh Khan’s birthday predictions through, you guessed it right, his dialogues.


Born on 2nd November, SRK’s Zodiac Sign would be Scorpio. Let’s see what his birth chart tells us for his 2021.


Let’s start with his first notable role as a lead, someone who won deals of heart by losing his heart(?). Yes, Baazigar. And yes, run away, Madan Chopra! 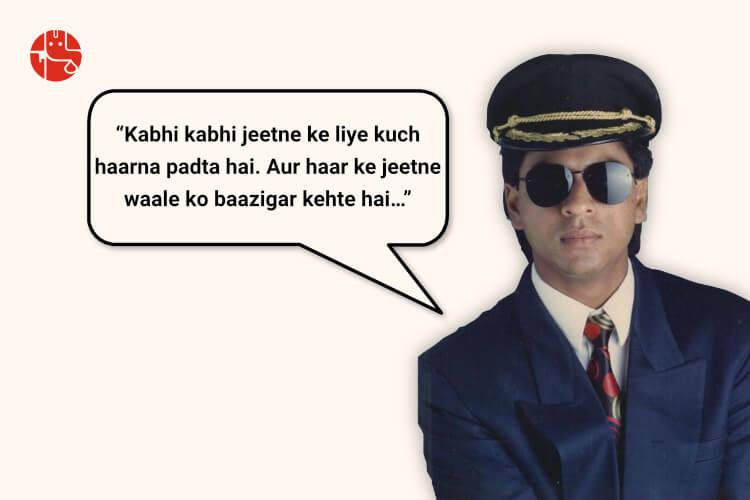 
His last performance that garnered some praise and sparked some joy, was Raees in 2017. Zero was able to create the hype but fell flat even lower than his character’s height. What Khan needs is a comeback. Can stars turn him into Om Kapoor from Om Prakash Makhija?


Well, the Influence or Dasha of Saturn and Bhukti of Rahu are controlling and restricting his career in the movies. But Kehte hain agar kisi cheez ko dil se chaho... toh puri kaynaat usse tumse milane ki koshish mein lag jaati hai. Jupiter is going to enter Aquarius after 19th November 2020, and that is likely to provide a boost of Positivity to Rahu. In short, Picture abhi baaki hai mere dost! Saturn in Mooltrikoni and Yogkaraka may provide him just the opening he is looking for, marking a heroic comeback. 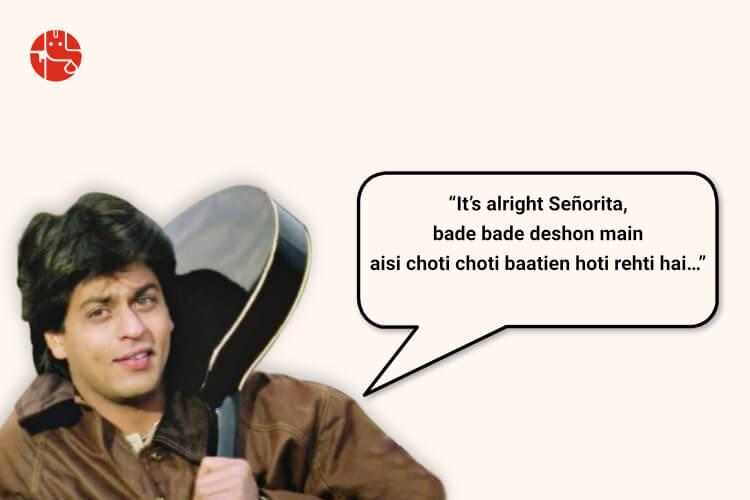 
Happy New Year, Dilwale, Jab Harry Met Sejal. What was Bauaa actually thinking? Looking at these scripts, somebody was clearly Gumshuda in some questionable thought while taking on the projects. Don’t we, the people of Swades deserve another Mohan Bhargav or Coach Kabir Khan?


15 saal, 4 Mahine, 10 Din. Well, Planets predict that it may take some time. Par waqt… waqt hi to nahi hai humare pass… Okay, enough filmy for a day! The Good news is, after 7th March 2021, when Antardasha of Mooltrikoni Saturn begins, he may take on some various content-driven roles that are likely to suit his skills. Of course, there are chances that he may not get the money he is used to for those roles, but as Jug from Dear Zindagi would say, “Safe feel karne ke liye pehle saare dar mitana zaroori hai”. 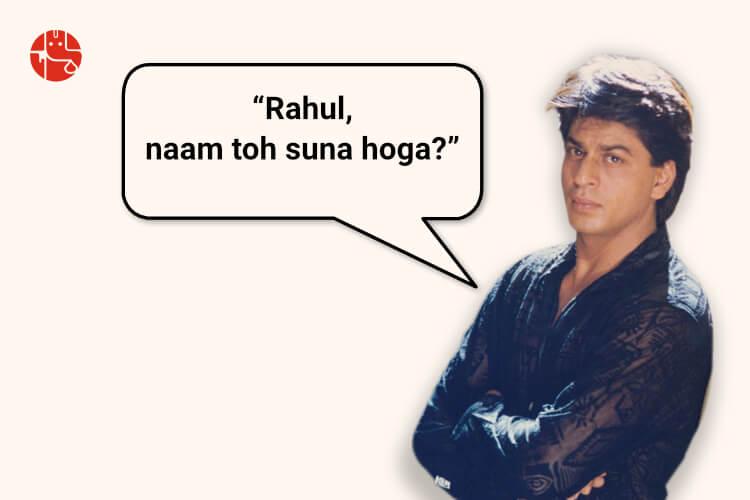 
“Chaaron Taraf Hain Mere Hi Charche, Hoton Pe Hai Bas Mera Naam” these lines from Baadshah the song, is literally what he has been over the years. Be it his name lit up on the tallest building on the world or trends set on the Twitter with #AskSRK. At the same time, you see controversies coming up on how he behaves publicly, sits on a train berth, and many more.


The legend is only likely to grow. The major period of Saturn, which has made a firm and strong place for him in industry, will continue to keep him in the hearts of his followers and mind of his haters. His name is Khan, and he is not temporary. If anything, the fanship of the King is only likely to grow after March 2021. After all, “Jo maza apni pehchaan ke saath jeene mein hai ... woh kisi doosre ki parchai banne mein nahi!” 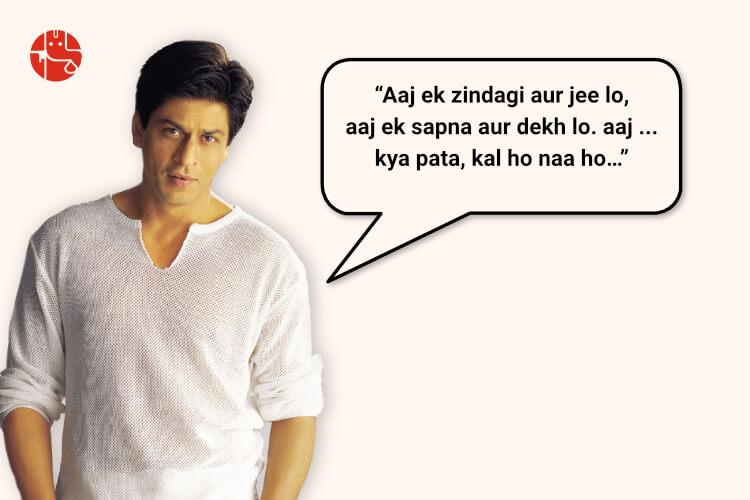 
One thing is for sure, he wouldn’t be where he is today without the dedication and hard work. Everybody glosses over the glamour, very few know about the sweat that has gone behind the success. Many of his co-stars have praised him for the energy he brings to the set, despite having a sleep schedule of merely 4 hours a day! Does Punjab Power also lights up Suri’s life full of energy?


Well, as it turns out, Don ko rokna mushkil hi nahi, na mumqeen hai… This year, just like every year, he is likely to have sound and energetic health, without any breaks. The strong and sensitive transit of Jupiter and Saturn in the houses of health. Full energy and enthusiasm reporting to Squadron Leader Veer Pratap Singh.


You too can attract the benefits of mighty Jupiter with a Yellow Sapphire (Pukhraj). 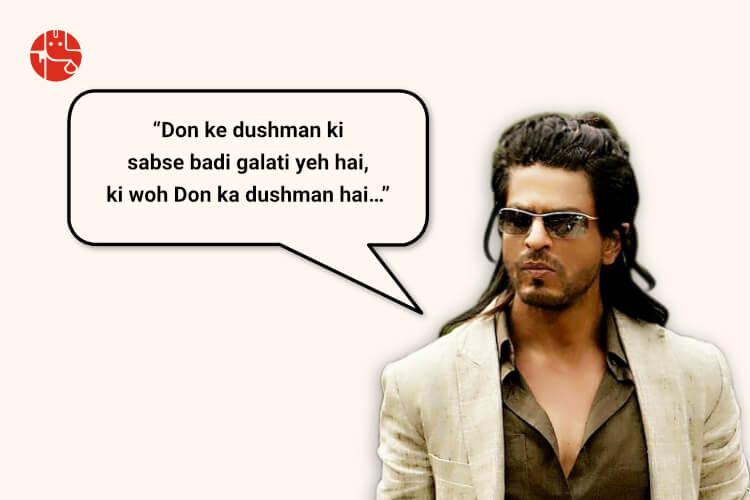 
For this Mufasa, the kingdom he used to rule is changing. New talents, movies that are not his forte, and his own contemporaries are making their own mark. The real question is, what future holds for the King? Being the wittiest person around, sure he would pull out this line from Don. “Mujhe andhera pasand hai, tumhare aane waale kal ki yaad dilata hai…” Astrology, on the other hand, pays him the tribute in his own style: larger than life. Have a go!

A  decrease in numbers of fans

HONESTY, HUMOUR, HARD WORK and a bit of HARAAMIPAN ;)


Among all the nostalgia of a career spanning over two decades, we wish Shah Rukh Khan a happy 55th birthday. May he keep bringing the joy to the millions, help the ones who are in need with his Meer Foundation and other countless charities. As a promising and healthy year is around the corner, we call out all the SRKians, to count One Two Three Four, get on the Dance Floor, and rejoice. Adios, for now. Phir Milenge Chalte Chalte!


To Get Your Personalized Solutions, Talk To An Astrologer Now!
With Ganesha’s Grace,
The GaneshaSpeaks.com Team