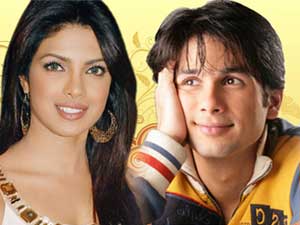 Celebrities love to keep the media guessing about their personal lives, which may not always be a good thing. Bollywood superstars Priyanka Chopra and Shahid Kapur, who are yet to come out in the open about their relationship, are learning this the hard way.

The suspense over their relationship status has made rumour mongers a bit queasy and they have started imagining (aloud!) the most scandalous things. Like, during an interview with a radio station, Shahid was left fuming when an RJ cheekily commented that "it must have been very difficult for Priyanka to satisfy so many men on the sets of the film (Kaminey)".

But the rumour mills didn't stop here. First, there were reports of the two, who were brought together by Vishal Bharadwaj for his upcoming film Kaminey, were seen cosying up to each other. Then, there were talks about Priyanka's proximity to British actor Gerard Butler. The fact that Shahid stays in the same building as Priyanka has only made the gossip brigade busier. And besides the building, the duo undoubtedly shares an excellent chemistry.

Ganesha checks with the help of Vedic Astrology if there is a 'Kismat Connection' between the two.


May Lord Ganesha bless them with a stable love life.