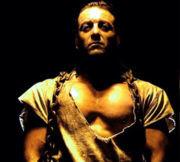 It was 31st July 2007, Tuesday early morning. I was deeply involved in conversation with planets. Suddenly mobile rang and I answered the call. Voice said “Sir, what will happen to Sanjay Dutt, we all are very anxious to know, say something Baba. You Astrologers ought to know everything”.

I was speechless for three seconds and then replied “Ok, give me a moment”. I opened Sanjay Dutt’s horoscope and had a look at planetary transits of the day. I realised that his Solar Return chart was heavily afflicted. I replied in cold voice “Unfortunately, Stars are not at all in his favour, he will be imprisoned”

After about an hour, some of my colleagues were knocking the cabin door. Excitement on their faces indicated me something. I opened the door and they exclaimed “Sanjubaba is going behind bars for six years.congratulations for the accurate prediction”

I was again speechless, sad to hear the unfortunate result, but glad about accuracy of prediction.

Sanju’s sentence is bliss for the relatives of those who had lost their lives in Bombay Stock Exchange blast and it is a bane for Bollywood.

Munnabhai Sanjubaba is a Leo with powerful disposition of Moon in his chart. Leos are able to deal with adversities without letting their inner-self shaken with any unfortunate event. Sanjay Dutt is one of them. He has seen many ups and downs before and still sailing on high tidal waves.

No doubt he has plenty admirers across the world who may be ready to place plea `Please don’t do this with him’ Sanjay Dutt’s Solar Return for the year indicates that he will have no escape. In the Solar Return chart which had just changed at 22 hours 38 min. 35 second on his birthday, he has Rahu (Dragon’s Head) in the 12th house, indicating Bandhana Yoga. This is strong indicator of imprisonment.

Transiting Saturn, Venus and Ketu’s influence over 10th house from his Natal Sun and over Natal Mars as well Venus indicates that his social image will surely be tarnished. Only saviour here seems public, which is indicated by Moon in Capricorn in the Return chart. Ganesha also notes that Navmansha D/9 chart of Solar Return is Scorpio Ascendant which matches with his Natal Ascendant. This factor indicates that he will not suffer for very long time. However, he will have to undergo imprisonment because Rahu and Ketu (Dragon’s Head and Dragon’s Tail) are reflectors of Karmic relations and they pay us back good/bad rewards in the same life. In his case, he is paying debt of Past Karmas in the current year.

Film Producers and industry bearing loss of 150 crores may not be able to help in this situation as Venus the prime significator of films is under the clutch of two malefic planets Saturn and Ketu (Dragon’s Tail).

Summarily, Ganesha feels that Sanjay Dutt requires blessings of highest orders in order to save himself from this imprisonment. Ganesha’s Best Wishes are always there with him.