The stunning, super successful Sandra Annette Bullock, the illustrious, Hollywood actress and producer, doesn’t need a long introduction. The winner of the Oscar Award for the Best Actress for 2009 film, ‘The Blind Side’, this amazing actress initiated her career in the year 1986. After acting for television shows and plays, she appeared in a string of films.

Her first notable film performance came for the science fiction, ‘The Demolition Man’. Later, she came up with spectacular performances in films like, ‘Speed 1 & 2’, ‘Ms. Congeniality 1 & 2’, ‘Crash’, and ‘While You were Sleeping’. Credited for her exquisite presence in the hugely successful, year 2007, film ‘The Proposal’, she has appeared twice in People’s magazine’s list of ’50 Most Beautiful People’.

The versatile star has displayed her humane side on many occasions, be it donating for causes like Indian Ocean Tsunami, and the more recent Haiti earthquake or fighting the legal battle for obtaining the full custody of her husband’s five year old daughter, her own step-daughter. 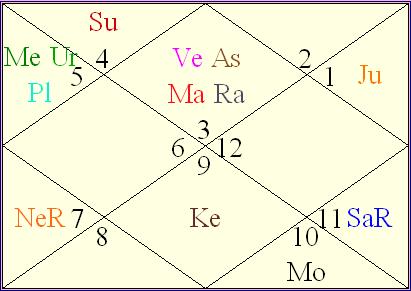 Sandra is born with Gemini Ascendant, with Mars exactly on the Ascendant within one degree orb, and Venus just three degrees behind Ascendant. But Venus was in the ‘applying aspect’ at the time of her birth. This is what makes her a hard working and potent actress.

Sun in Cancer also indicates that she is extremely emotional about her work and as an artist.
High Air Element indicates her intelligence, brilliance, and analytical skills.

Moon in Capricorn is responsible for her practical side, and Moon’s aspect to its own sign in the second house of finances i.e. Cancer offers her good financial gains too.

What helped her fetch the Oscar?

Ganesha observes that Sandra is currently under the influence of Saturn major-period and Venus sub-period, which will rule till 9th October 2012. Saturn is retrograde, and Swagruhi (placed in its own sign) is in the Bhagya Bhavan (the house of luck). Venus is placed in the Ascendant an active angle of the horoscope.

On the day she won the Oscar, transiting Moon was in applying opposition to her Natal Venus. Moreover, transiting Mercury and Jupiter had just crossed the10th House of luck’s Cusp.
Most important factor is, Venus was transiting through Pisces it’s a sign of exaltation. Venus being the champion and proponent of arts and being a planet placed on an angle in her chart, is very active. Venus was at 6 degrees of Pisces and the 11th House of Gains’ Cusp is at 13 degrees of Pisces.
No wonder, these factors worked in her favour, and she went on to win the Oscar Award for The Best Actress for her 2009 film ‘The Blind Side’.

Will Sandra’s Career touch new heights in the near future?

Ganesha notes that on 2nd of May 2010, Pisces the sign placed in the 10th House of Sandra’s Natal chart. This will lead her career to ascend new heights, and she will not only get more interesting offers, but her performances also shall get boosted remarkably by the planetary influences. At the same time, she might become a little more choosy about the roles being offered to her.

Till October 2012, Sandra will keep witnessing greater heights in her career, treading uncharted territories, and would remain in the limelight, foretells Ganesha.

Is your career on the wrong track? Click here to ask a question.