Riteish Deshmukh and Genelia D’Souza will have a blissful life together, blesses Ganesha! 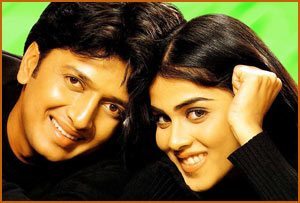 Riteish and Genelia’s love story is like a perfect love story! Riteish  eshmukh, actor, an architect and son of the ex-Chief Minister of Maharashtra. Genelia D’Souza, an actress and model met Ritesh on Hyderabad airport, almost a decade ago. They were working on a movie ? Tujhe Meri Kasam – together then. They exchanged pleasantries on the sets, but it didn’t stop there. Their professional camaraderie grew and before they knew it, they became best friends off the sets, too, and rest is history! Every relationship goes through ups and downs, and theirs is no exception. There had been rumours about Riteish’s alleged link-up with one of his co-stars, which had apparently troubled their love life. But all’s well ends well, isn’t it?

After about ten years of friendship and togetherness, Riteish and Genelia are going to tie the nuptial knot on 3rd February, 2012. The whole Hindi film industry and leading political personalities have joined the celebrations and have become a part of the most awaited day of the couple’s life. Ganesha showers His blessings on this beautiful couple and foresees what future may have in store for Mr. & Mrs. Deshmukh! 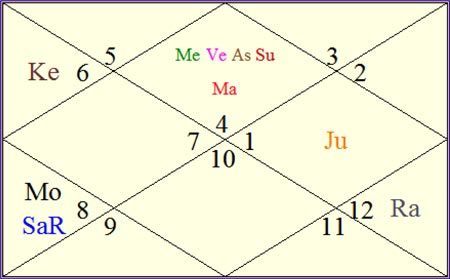 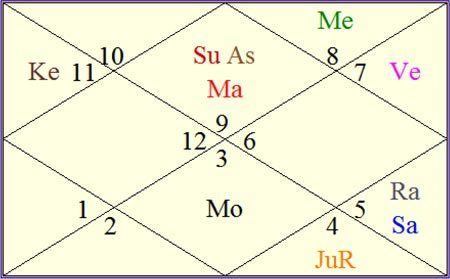 (Moon is not taken into account, as time of birth is unavailable)

Ganesha wishes good luck and a happy married life to the couple.