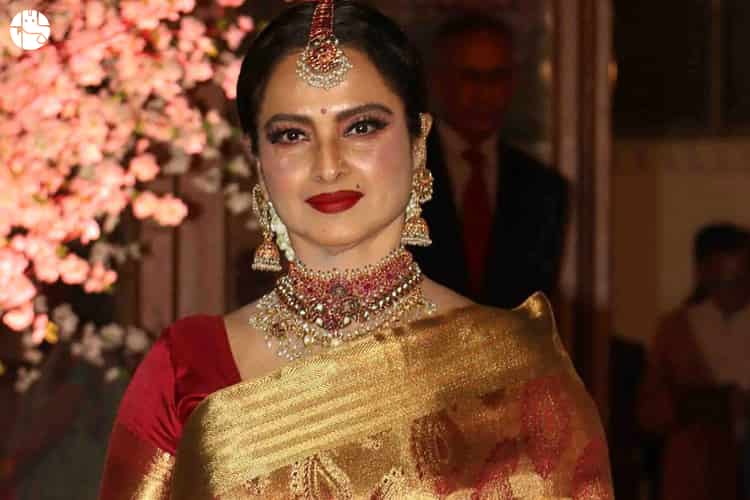 Rekha is unarguably one of the most influential names of the Indian film industry. A strong persona, full of grace and glamour, she is backed by over five decades of acting experience.

Rekha was born on 10th of October, 1954 in Chennai, to Tamil actor Gemini Ganesan and Telugu actress Pushpavalli. Rekha is a stage name, and her real name is Bhanurekha Ganesan.

In her glorious career that began in the Telugu film industry, spanning across years of contribution to the Hindi film industry, Rekha has featured in over 150 films. She is lovingly and truthfully regarded as one of the most versatile and finest actresses of Indian cinema.

Rekha never dreamt of becoming an actor. For a large part of her childhood, her father did not acknowledge his paternity. When Rekha set out to pursue acting, it was to make ends meet. For this, she quit school at the age of 13 and ventured out to build an acting career. In 1969, she starred in her first Hindi movie and another movie 1970, brought her fame.

Rekha was disdained for her dark complexion and lurid clothing. It was in 1976 that the Indian cinema witnessed a new avatar of Rekha. It is during this period where she had dedicated time and focused on improving her physique, acting skills, and onscreen presence.

Rekha’s journey from financial struggles and starting early, to numerous challenges alongside the road and eventual success, is indeed a blend of both good and tough times. Regardless of which, Rekha always came back resilient and unblemished. Her life story is the construction of many intricate incidents and noteworthy moments.

On her 65th birthday, here are some insights into what the year looks like for her.

Stars in her life

She is an icon of glamour and is best known for her evergreen personality. For her, the coming year will only bring more glamour. She should find herself drenched in personal happiness throughout the year.

The transit of Jupiter to the fourth house will bring all-around happiness in her life; moreover, some big awards and recognition might find their way to her. The overall artistic journey of Rekha should be further appreciated and could be conferred upon with awards. The transiting Jupiter will fetch her all the spotlight, and the country’s respect for her will further increase. In conclusion, this year would only bring her success, fame, and awards.

During this year, she will remain busy in diverse activities. But due care should be taken for her health, as an overload of work could lead to health issues. With the effects of transiting Saturn over the fifth house during January, 2020 could bring by minor health issues. But no reason to be alarmed. A healthy diet and proper care towards health should work wonders for her.

Image of Personal and Professional-Life

The upcoming year will envelop her in positive vibes and happiness from loved ones. New beginnings will pan out as desired. A robust personal experience could be waiting to transform her life. Positive energies will help her to surmount all upcoming challenges and empower her professional life. She has already established a strong foundation and acquired material gains. There is much more that could be underway during the second half of the year 2020.

This phase of life will herald new projects as well as projects that are in the pipeline. She should be able to meet the requirements of these projects with the best of her abilities.

Ganesha wishes good luck, healthy life, and a bright future ahead in her artistic journey.