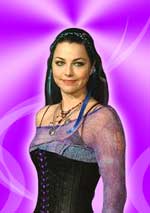 Hartzler best known as Amy Lee born in Riverside, California- is an American singer-songwriter and classically trained pianist. She is an original member and lead singer of the Grammy Award winning rock band Evanescence. She founded a band with Ben Moody. She has contacts with a large number of influential people ranging from classical musicians such as Mozart to modern artists like Bjork, Tori Amos, Danny Elfman, and Plumb.

She has Scorpio rising Ascendant with conjunction of Sun and Mercury. Mars is in conjunction with Saturn in Virgo sign. Ganesha observes that Mercury and Venus both are in female sign. All planets except Moon and Jupiter are in female sign. Jupiter was transiting from Scorpio, this transit provided her opportunity to develop skills in business, a flair for handling money and a marked degree of social power. Currently, Jupiter transits from her second house, which is also considered for her voice and throat organ. This placing of Jupiter increases the chances for personal success, fortune and general prosperity. It inclines to government and is responsible for business affairs and tends to bring gain through law, insurance, banking, religion, science, education, literature and travel. The danger here is that the native might grow too accustomed to the silver spoon in his/her mouth, and sometimes there are so many opportunities for advancement, they can’t seize them all. Transit of Rahu shall tend to control or be controlled in matters related to her origins, early upbringing, etc. She can consider that her background restricts her, or she may view it as a framework, which she can use to bring order to her life. Ganesha feels that after April 2008, Rahu will be transiting over Natal Venus and Ketu. This transit of Rahu and Ketu may not bring favor for first two months. Ganesha suggests her to offer some food to beggars every Saturday during Aril 2008 to July 2008.

Ganesha provides her strength needed to deal with all the dark clouds, which might overshadow her after April 2008.