What the Future Holds for the New Young Faces of Bollywood? Ganesha foretells. 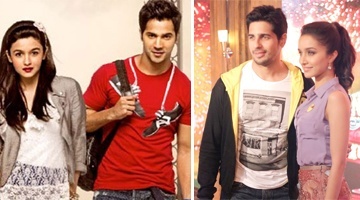 Alia Bhatt, Varun Dhawan, Siddharth Malhotra and Shraddha Kapoor is the new young faces of Bollywood right now! Ganesha looks at their individual Horoscopes to ascertain their future career prospects in Bollywood and what’s in store for them on the relationship front.

How will Alia’s career advance in Bollywood in the coming years?
As per Ganesha’s calculations, 2015, 2017 and 2018 are going to be remarkable years in Alia’s career as an actress. Ganesha feels that 2017 onwards, she will become more refined actress (compared to her current performances). Due to retrograde Venus factor, she is likely to have moderate success in Bollywood.

Born with retrograde and exalted Venus, Alia is going to remain slightly unlucky as an actress, feels Ganesha. This is because a natural benefic planet is gaining power due to exaltation but because of retrogression, it has become weak. Despite this, chances of gaining fame for Alia is very likely on the cards.

Besides Venus – Jupiter and Mercury are also retrograde in her Chart. These three retrograde planets indicate that Alia will be popular for unconventional roles, unconventional way of thinking and statements. She also has the potential to win some awards for her performances. Her career may pass through rough patches too. Sudden rise and falls are on the cards. She will have to be very cautious and be on her guard, as there is a higher probability that she could get defamed due to some or the other reason. With Saturn in Aquarius, Alia will surely work harder to achieve her career goals. Her date of birth is 15th, which totals to number 6, ruled by Venus. This is also a favourable point for her career growth.

What’s in store for Alia Bhatt on the relationship front?
Retrograde Venus indicates that relationships are going to remain tricky for her and even if she moves on from one relationship to another, past is going to haunt her. She would like to keep her affections or relationships more private. In other words, this factor indicates scope of secret relationships. This retro Venus factor makes her very compassionate, specifically when it comes to love relationship.

How will Varun’s career advance in Bollywood in the coming years?
As Varun is born with exalted Sun, he is likely to earn a name in Bollywood, and his career as an actor will remain stable. Jupiter is Swagruhi, exalted Venus is placed with debilitated Mercury creating Neech Bhang Raaj Yoga in his Chart. These two factors are also indicating scope of gaining more fame in Bollywood. In his case, Ganesha would opine that ‘best is yet to come’. Mars-Saturn opposition in his Horoscope indicates that he will have to struggle more, but he does have a potential to reach to a better level than where he is at present. Rahu’s connection with Mercury, Jupiter and Venus will keep him in the news and under the spotlight for one reason or another. Varun’s date of birth also totals to 6 as Alia’s, so this factor is also in his favour.

What’s in store for Varun Dhawan on the relationship front?
Ganesha notes that Varun is born with Guru-Rahu Chaandaal Yog, which indicates scope of facing troubles due to relationship with the opposite sex. This factor also indicates chances of defamation. Old scriptures state that the natives born with such a combination will indulge in immoral or unethical activities and will be defamed due to the same. Ganesha feels that Varun is likely to have more than one relationships during his life because of Rahu’s connection with Venus. Stability of the relationships cannot be promised due to the same factor. In a nutshell, Ganesha feels that Varun is going to face troubles at personal front but would be successful as an actor.

How will Siddharth’s career advance in Bollywood in the coming years?
Siddharth Malhotra is born with Mars Venus conjunction. Jupiter is debilitated, placed with Sun in Capricorn. Venus is in the Sign of exaltation in the Navmansha Chart. These factors are indicating pretty average success in the film industry. He will have to wait for a longer time to succeed as an actor in Bollywood. As an actor, he will have to work very hard on his professional skills. He wouldn’t be able to find stability or fame/money in this industry very easily. He will also need someone’s support (or assistance from Godfather kind of figure) who can lead him to the success ladder, as Jupiter is weak due to debilitation in his Chart.

What’s in store for Siddharth Malhotra on the relationship front?
Siddharth is born with Venus Mars conjunction which indicates intense love affair. Mostly, people born with such a planetary combination go for love marriage. His love relationship would be more stable as the conjunction happens in the fixed Sign. He would like to remain committed to the person he loves and will try his level best to marry his beloved.

How will Shraddha’s career advance in Bollywood in the coming years?
Shraddha is born with Mars, Venus and Saturn in Capricorn. Jupiter is retrograde and forms opposition with Sun in her Chart. Venus – the significator of arts is in Shravan Constellation in her Chart. Even Venus and Saturn conjunction in her Chart points towards potential as an artist/actress. However, this conjunction would also indicate necessity of sufficient hard work, and success will come only due to hard work, as Venus-Saturn conjunction is in Capricorn, the Sign ruled by Saturn (the slowest moving planet). As Mercury is debilitated thus weak in her Chart, she will have to work more on the dialogue delivery part of her performances, feels Ganesha.

What’s in store for Shraddha Kapoor on the relationship front?
Like Siddharth Malhotra, Shraddha is also born with Venus Mars conjunction. The conjunction is in CapricornSign. This indicates that she will go for love marriage but it will be for two reasons – first being enhancement in her social status and another would be – a well planned decision that can help sail through life more easily. Meaning, it will be a well planned and calculative step, as per Ganesha’s view. Shraddha has a lot of potential as an actress, but she may need to see to it that her career isn’t compromised because of her personal/marriage life.