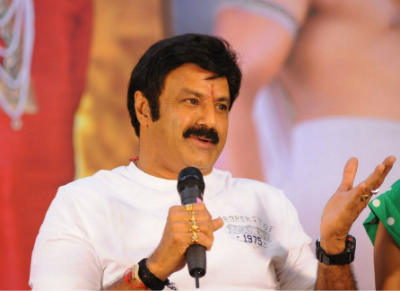 Nandamuri Balakrishna, the sixth son of Telugu actor and former Chief Minister – N.T. Rama Rao, is the living legend and one of the greatest heartthrobs of Telugu Cinema. In a film career spanning 40 years he has acted in ninety nine films in a variety of roles. He is best known for depicting larger-than-life roles in most of his films. Being famous for his charisma, style and his dashing and inspiring personality, the “Lion of Telugu Cinema” has received the prestigious Nandi Awards and South Indian International Movie Award. His juggernaut of success started with Apurva Sahodarudu (1987) directed by K. Raghavendra Rao. Since 1987 his silver screen journey has been unstoppable once he had given seven greatest blockbusters in a row-Presidentugari Abbai, Muvva Gopaludu, Bhargava Ramudu, Inspector Pratap, Bharatamlo Bala Chandrudu, Tiragabadda Telugubidda and Rakthabhisekham. His latest films Simha, Legend, Lion, Dictator won hearts of various film-lovers. The legend has started shooting for his upcoming 100th film Gautamiputra Satakarni, directed by Kris, which is based on the life of the Andhra ruler who is said to have ruled over mainly vast parts of Southern and Western India. Telangana Chief Minister K Chandrasekhar Rao, veteran actor Venkatesh and a host of prominent personalities from the world of films and politics attended the ‘Muhurtham’ event of the film in Hyderabad.Will it be the most successful film in the career of the great N. Balakrishna? Will he once again reign in the hearts of the numerous fans around the world? Let’s see what Ganesha has in store for his 100th film?

The Starry Picture of the Superstar:

Astrological Predictions – A look at his future and overall prospects: