My Super ex-girlfriend Uma Thurman is engaged to Arpad Busson 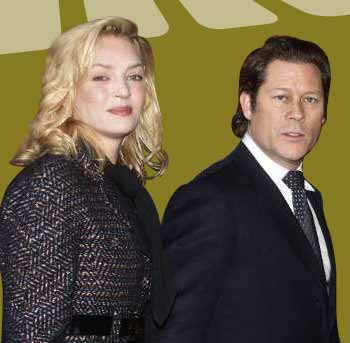 Introduction:
My Super ex-girlfriend Uma Thurman is engaged to a London-based French/Swiss financier Arpad A.Busson aka “Arki”.Uma was earlier married to an English actor, writer, director, producer, voice-over artist and occasional musician Gary Oldman.Gary actually needs no introduction, as you may remember his character Commissioner James Gordon in ‘Batman Begins’.Uma and Gary were married in 1990 and after two years of marriage got divorced in 1992.After an interval of about 6 years,she again married an American actor, writer and film director Ethan Hawke (Hamlet and Lord of the war fame).They got married in 1998 and divorced in 2004.She had vowed to never marry again but cupid has again targeted her heart and she is now madly in love with Arpad Busson.Ganesha studies Uma Thurman and Arpad’s horoscope and throws light on the future of their relationship,with the help of the Vedic Astrology.

Opposites attract – Uma and Arpad
It is a universal rule and truth that opposite poles attract each other.Ganesha observes that the significator of love,Venus,is placed in the Midheaven in Uma’s horoscope which makes her a very good actress.Mars Venus conjunction in Taurus makes her a sexually passionate person. Arpad Busson has Venus in Scorpio.Taurus is exactly 180 apart from Scorpio hence Uma and Busson are attracted to each other.

Other planetary combinations between Uma Thurman and Arpad Busson’s chart

Uma has Rahu in Aquarius in the 7th house which always gives her instability on the personal partnership front.Arpad has Jupiter and Moon in Aquarius.Uma’s Rahu falling over Arpad’s Jupiter is not a very good sign but as they have Venus to Venus opposition and Uma’s Mars also forms opposition with Arpad’s Venus they may remain in love with each other.

Will Uma and Arpad’s relationship last long?
Busson’s seventh house of Surya Kundli contains Rahu and retrograde plus debilitated Mars.Uma Thurman has Rahu in the seventh house and seventh house Lord is debilitated and thus weak.Ganesha notes that Saturn is the seventh house Lord in her chart.She is currently under the influence of Saturn major period,Saturn sub peirod and sub sub period of Saturn.Seventh house is activated due to Saturn’s major period plus transiting Saturn aspects her seventh house at present.This is the main reason why she came across a suitable partner again.However,Saturn’s transit through Leo is going to bring a change in her thinking,lifestyle and attitude towards others.She will have to work quite hard to maintain harmony in this relationship.Despite deep love and affection between herself and Arki,she may face difficulties in this relationship or may even feel insecure due to Saturn’s transit over the Ascendant and Rahu’s transit over Natal Moon.

Ganesha notes that 30th June 2010 to 12th December 2010 is the period when she will be under the influence of Saturn major period,sub period of Saturn and sub sub period of Rahu.This period can be quite disturbing for her as far as her relationship with Arpad Busson is concerned.As Arki’s Saturn,Sun and Ketu are falling on her Natal Moon in Capricorn,she may feel quite pressurised to remain disciplined and might have to live life in a more scheduled or organized manner.Arpad may make her feel depressed,worried or tensed- knowingly or unknowingly.The only good factor which may help this relationship survive is Venus to Venus opposition,says Ganesha.

Good luck to the newly engaged couple and may Lord Ganesha bless Arki and Uma Thurman with stable and satisfactory love relationship.