Michael Jackson bounces back with ‘The Girl is mine’ 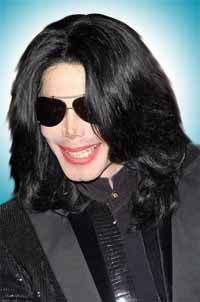 Introduction
The King of Pop, Michael Jackson who became a pop icon, went into oblivion a few years back. He has ruled the world of pop music since late 1970’s. His career as well as personal life have become the talk of the town since almost four decades. Recently, he was cleared off from the allegations of sexual abuse. He will be making a comeback in February 2008 with his new album “The Girl is Mine”. Ganesha finds out what destiny has in store for this popstar.

Planets and his profession
Planets exalted in the AL or the 7th from AL promise reputation and success in their fields as well as good fortune. Atmakaraka Mars is placed in the 10th house from AL promising reputation and success in field of his activities. But Mars as malefic planet placed in the 10th house causes troubles as well. AL Lord Moon placed in the 8th house is not desirable at all indicating blames and reversals in life. Jupiter-Rahu conjunction in the 4th house from AL spoiled his public image.

Controversies
He is renowned for his changing appearance and ‘beauty’ surgery. Venus is placed with Uranus in watery sign Cancer reveals this secret. Such tight conjunction always makes a person famous for his different test and appearance and also for his artistic abilities. Michael has both!!!! In 1993 during the Saturn-Rahu phase, Jackson was accused of sexual abuse but he was cleared of all charges later.

Future predictions
He will be releasing a new album on February 11, 2008 called Thriller 25 which will include new material.Currently, the transiting Jupiter is moving in the 4th house aspecting the 10th house, which encouraged him for launching a new album. But transiting Rahu in the 8th house, Jupiter in the 6th house and Saturn in the 2nd house from AL seem unfavorable. He is currently running Mercury-Rahu-Jupiter period and Rahu is not only Vargottama but also placed well in the D-10 chart and thus may help him. Considering all these aspects, moderate success is foreseen in his new venture.

We wish him all the luck for future endeavours.