If there’s anyone in Bollywood who can even claim to come close to yesteryear beauties Madhubala and Nargis in grace and talent, then it has to be Madhuri Dixit. The ‘dhak dhak girl’ who reigned supreme on the silver screen in the late 80s and 90s has been a heartthrob of the millions across the globe. She has won many awards and accolades for her spectacular performances in the films like Tezaab, Beta, Hum Aapke Hai Koun, Dil To Pagal Hai and Devdas. After ruling the industry for around 15 years, Madhuri, quite unexpectedly, married Dr Shriram Nene, a US-based surgeon. She happily quit the life of a superstar to be a wife and a mom. In 2008, she was awarded Padmashree, and recently she featured in the list of ’33 women who made India proud’ by The Economic Times. By leaving Bollywood, Madhuri has left a void in the industry, which is yet to be filled.

Artist MF Hussain’s muse and choreographer Saroj Khan’s darling, will Madhuri Dixit-Nene once again cast her magic spell on the silver screen? Ganesha predicts her destiny with the help of Vedic Astrology System. 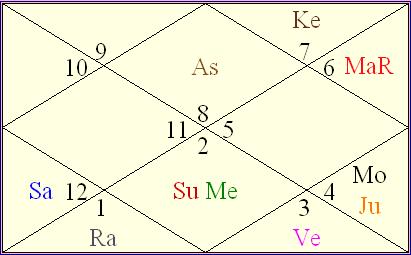