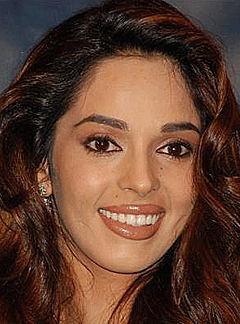 Mallika Sherawat- the bombshell of Bollywood is celebrating her 26th birthday. Her personality is interesting for the lovers of astrology. Ganesha foresees her future in acting.

Mallika Sherawat alias Reema Lamba was born on October 24th 1981 in Rohtak, Haryana with rising Leo Moon. Hence, she has a robust health. Her birth date total is 6 which Lord is Venus. Thus, she always wanted to pursue modelling and acting. At present, she is getting success by acting. She has an artistic side. She is bold and beautiful. Venus is in Scorpio sign denoting well known and the most prominent sexy actress in Bollywood. Because of this, she is regarded as the sex-symbol and has won compliments for her curvaceous body from stars like Amitabh Bachchan and Shahrukhkhan. Mallika has been signed to play one of the leads in a Tamil film titled Dasavadharam starring Kamal Hassan. The approximate budget of the film is 30 crores. The film will have Kamal Hassan playing 10 different roles. Currently Transiting Saturn is passing over the Moon as well as Mars which is aspecting the Sun but Sun is debilitated. This means that she will not get any major downs in next year. The film may become a super hit. Because after the end of November of current year there will be trine situation between transiting Jupiter and Natal Moon. This means that she will be blessed by benefice Jupiter in the next year. Plus Venus aspects10th house in its own house which indicates that she will perform very well in acting field.

All in all considering all the planetary position along with transits, Ganesha feels that her future in acting field will be bright. She will show some improvement for her problems at professional front. There shall be more financial gain in next year. Ganesha feels that Happiness and ceremony are likely to be seen in her family. As far as profession is concerned, she will travel more and gain more. She will attain new heights and reach a new horizon of honour and fame in her professional life.

Ganesha wishes her all the success and glory this birthday! May she continue receiving name and fame!