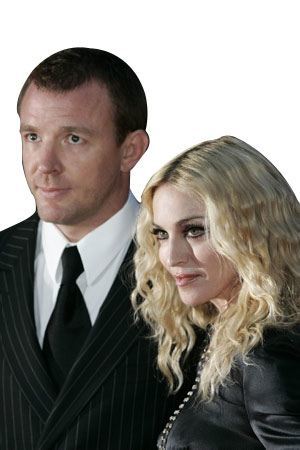 Introduction: Ritchie, 40, and Madonna got married seven years ago at a Scottish estate. But this high-profile couple has not been seen together very often in recent years. As mentioned in the previous article, Madonna and Guy Ritchie were on a verge of break up. Now, they have officially confirmed that they have decided to end their seven-and-a-half years of marriage. The divorce rumors got louder after their extremely distant and strained appearances on the 2008 Cannes Film Festival’s red carpet. GaneshaSpeaks sees over the planetary positions of Madge and Guy to analyze the reasons that led to divorce.

Compatibility:
Madonna is a Leo. But three planets in her chart i.e. Moon, Mercury and Pluto and also her Ascendant in Virgo falls over Guy’s Natal Sun indicating strong affection and attraction for each other. Guy’s Mars is placed in Leo in exact conjunction with Madonna’s Sun indicating a passionate sex life and also some strong disputes and arguments time and again. Guy’s Jupiter conjuncts Madonna’s Natal Moon and Ascendant, making him a great supporter who always inspires her and enhances up her character. But, Madonna’s Saturn squares his Sun indicating older woman and the consequent possible problems in relationship. Guy’s Mars exactly conjuncts Madonna’s Sun indicating that she is the dominating partner in this relationship and also in ego clashes.

Reasons for divorce:
Currently, Madonna is passing through a difficult transit period. She is under the middle phase of Sadeshati and also under the influence of Rahu-Venus period. Venus is debilitated in the Navmansa chart causing problems in relationship. Guy has transiting Uranus in conjunction with Mars which always causes problems particularly in the male’s chart.

They tried hard to maintain this relationship over the last few months but their arguments were getting out of control. And finally this heavy transit forced the couple and their parents to take this painful decision.