Kangana will have to brace up for a bumpy ride ahead; Keep Calm and Wait till Aug '16 says Ganesha! 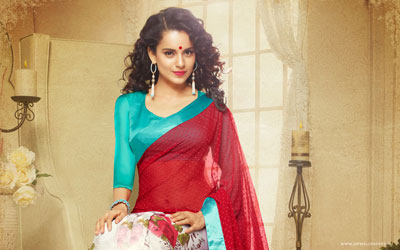 Kangana Ranaut is regarded by many as the agent of change in Bollywood because of her out-of-the-box performances and the incredible ability to do unconventional roles. Her class act in the magnificent movie Queen got her several accolades and even the highly coveted National Award. But, as far as the matters of the heart are concerned, Kangana has been through some turbulent moments and the current controversy about her alleged relationship with Hrithik Roshan and whether the Gangster actress was crying on Aamir Khan's shoulders has been doing the rounds in Bollywood. What's in store in the upcoming months for the actress with a difference? Will things ultimately work out well? Ganesha has the answers... Read on!
Kangana Ranaut
Date of Birth: 23rd March, 1987
Time of Birth: Not Available
Place of Birth: Bhambla, Mandi Dist., Himachal Pradesh, India
Kangana’s Surya Kundli

[Owing to the unavailability of credible birth-time of the celebrity, the analysis and predictions have been done on the basis of the Solar Chart/ Surya Kundli with the help of Kangana's birth-date and birth-place only.]
Astrological Observations:
7th House Aspect on Natal Mercury in Aquarius
9th House Aspect on Natal Mars in Aries
Transit over Natal Ketu in Virgo
Cast 7th House Aspect on Natal Sun, Jupiter and Rahu
Aspect the Natal Venus in Capricorn
Astrological Predictions:
Mercury under a cloud – a cause for various problems?
Ganesha observes that due to the transit of the mischievous Ketu over 'Queen' Kangana's Natal Mercury, things may keep taking an awry turn for her! Mercury represents our decision-making abilities, our sanity, logic and communication skills, and if a planet like Ketu – who is known to create a lot of misunderstandings, bitterness and illusions – is transiting over it then you can very well understand the consequences!
Media Interactions and Public Appearances:
She will have to be very careful during the Media interactions and her public statements. She will have to anticipate some tricky questions being thrown at her or some emotionally disturbing situations.
Kangana in a bolder avatar post August 2016?
The planets indicate that Kangana may surprise us with an all-new glamourous and hot avatar post August 2016. We may also get to see her in bold and hard-hitting roles. Transiting Jupiter in the Sign of Virgo will prove to be a great blessing for her and she will be able to come up with some of her best works during this transit which will last for till September 2017.
Super Offers:
Ganesha foresees wonderful offers coming Kangana's way after Jupiter's entry into the Sign of Virgo. There are also chances that one of the movies that she does in the one year from then, may get nominated for some awards. Things are also likely to improve on the professional front for her.
Legal Troubles and Controversies – the spoilsports?
The current transit of Saturn will test Kangana on various fronts! Saturn is a super toughie amongst the planets and passing his tests are not that easy, says Ganesha! In Kangana's case, the Saturn return phase which will be in operation currently may give rise to some legal hassles and controversies.
Jupiter-Rahu Combination – Problems in Relationships?
Ganesha says that it is almost impossible to get away with the negative influences that the Jupiter-Rahu combine produces.  One of the biggest flip sides of this combination is the controversies that get created due to the relationships with the opposite gender. Kangana may also have to bear the brunt of this negative configuration in her Horoscope and it may take long for her to find stability and happiness in love.
Positive Changes in Love Life?
Despite of the negative influences in the relationships sphere in the Solar Chart of Kangana Ranaut as discussed above, Ganesha feels that there are some bright chances of things looking up for the stylish actress post August 2016. So, cheer up – there's something pleasant in store for you – says Ganesha to the Fashion actress.
With Ganesha's Grace,
Aaditya Sain
The GaneshaSpeaks.com Team
Share