Jupiter’s transit in May 2012 may bring in better times for Jugal Hansraj, says Ganesha

Jugal Hansraj? You may have to strain your brain a little and make some effort to recall who he is. You may recall him as a hazel eyed child artist with an innocent smile. Eleven-year-old Jugal made his debut with Masoom in 1983. It was during his childhood days that he enjoyed his share of fame and films the most. He debuted as a hero in the mainstream cinemas in 1994 with Aa Gale Lag Jaa.

With the chocolaty looks, he was surely among one of the cutest faces in the industry. The song ‘Ghar se nikalte hi‘ featuring Jugal became one of the most popular romantic numbers in Bollywood. And then came Mohabbatein wherein he worked with legends such as Amitabh Bachchan & Shahrukh Khan. In the decade that went by, he was seen doing cameos in Kabhie Khushi Kabhie Gham, Salaam Namaste and Aaja Nachle. He also served as the writer & director of the animated film ? ‘Roadside Romeo’.

Unfortunately, both his directorial ventures ‘Roadside Romeo’ & ‘Pyaar Impossible’ failed to get rave reviews at the box office. And thus the actor director seems to have hung up his moccasins. As the actor celebrates his birthday on 26th July, Ganesha finds out if the starry alignment will bestow success upon him in the new year. 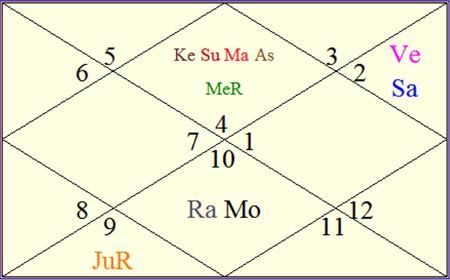 In a nutshell, Ganesha feels that the year end may bear some fruits, but till then Jugal will have to keep looking for opportunities or do the groundwork on the next project. According to Ganesha, the time between May 2012 and May 2013 is likely to be good for his career.

Ganesha wishes Happy Birthday to Jugal Hansraj well in advance and also wishes him good luck for his career.