His debut film ‘Tere Mere Sapne’ was a dream launch. Not only was the film well-received by the audience but debutant actor Arshad Warsi too became a star overnight. In spite of a good start to his career, the journey was not all hunky-dory for him. But after a string of flops and his share of lows in the
industry, today, after ten years, we all know him by a different name, and the credit goes to ‘Munnabhai MBBS’. It was in 2003 that director Rajkumar Hirani etched a character called ‘Circuit’, and this stout and short Circuit a.k.a Arshad Warsi became one of the best comedians of Bollywood. He also won the Filmfare Award for Best Comedian for ‘Lage Raho Munnabhai’, the sequel of Munnabhai MBBS. And how can one forget his outstanding performances in Golmaal (series) and Ishqiya?

With his films Double Dhamaal and Munnabhai Chale Amerika – sequels of his previous hit films- releasing in the coming year, the time ahead looks brighter than ever. But what do the stars say for the talented actor who celebrated his birthday on 19th April? Ganesha finds out with the help of Vedic astrology. 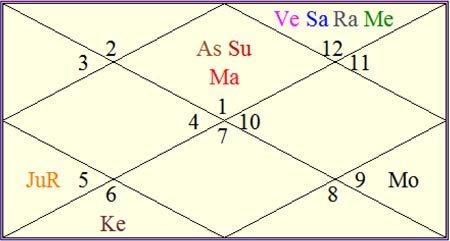