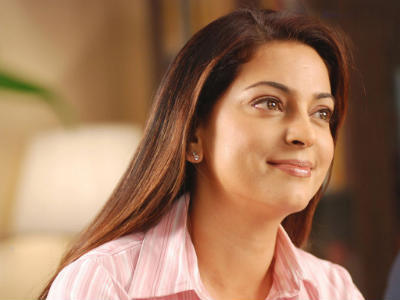 Juhi Chawla- when we think of her, the first thing that comes to our mind is that 1000-watt infectious smile which would instantly charm anyone, literally anyone! Naturally vivacious, amazingly attractive, a simple yet captivating beauty are some of the most famous adjectives that have always been most popularly associated with this Scorpio beauty, who was also a winner of the Miss India Beauty Contest, before she got the limelight for her acting prowess. Not many know that she has learnt the dance form – Kathak and that she is an accomplished classical singer! She was one of the reigning queens of Bollywood in the period of 1990-1999. Currently, she seems to be in great spirits following her Cricket team’s (Trinidad and Tobago Red Steel) in the Caribbean Premier League. So Ganesha takes a look at her Solar Horoscope and predicts the way ahead for the pretty Actress-Entrepreneur…
Juhi Chawla- Bollywood Actress
Date of birth:  13th November, 1967
Birth Time:      Not known
Place of Birth: Ambala, Haryana,India
SOLAR CHART

Owing to the unavailability of credible birth-time of the celebrity, the analysis and predictions have been done on the basis of the Solar Chart/Surya Kundli with the help of her birth-date and birth-place only.
Astrological Predictions :-
How will the year ahead be for Juhi – the Actress-Entrepreneur?
2) Will we get to see her in films in the coming year?
Ganesha wishes good luck to Juhi Chawla, one of the owners of the Caribbean Cricket Team Trinidad and Tobago Red Steel and also Kolkata Knight Riders.
With Ganesha’s Grace,
Rantidev A. Upadhyay
The GaneshaSpeaks.com Team