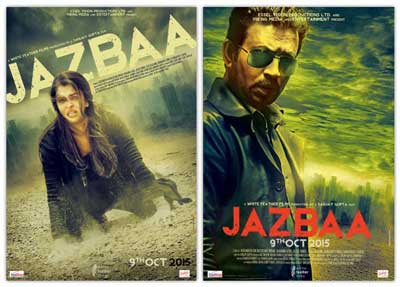 Ganesha foresees a wonderful comeback for Aishwarya and rates the movie 7 Laddoos out of 10!
One of the most awaited films in the recent times, Jazbaa seems to be a very special movie. Not only that the movie is one of the most ambitious projects of the talented director Sanjay Gupta, it also happens to be the comeback movie of the sensational and extremely beautiful Aishwarya Rai Bachchan. The former Miss World will be seen opposite the outstanding Irrfan Khan in the movie which promises to give us a rich cinematic experience with hard-hitting dialogues and some brilliant performances! Before the movie hits the theatres, Ganesha takes a look at the stars on the day of its release and predicts how it may fare at the Box-Office. Check out the special forecast!

The Week 1 and the Opening:

Ganesha wishes good luck to the cast and crew of ‘Jazbaa’.

Disclaimer : The Ladoos Rating is not meant to be a critical review or appreciation of any film, i.e. typically done after its release. Ladoos Rating is only intended to be a fair indication of the available planetary support for a film, basis the Chart cast for its Release Time, which, in turn, is meant to Astrologically forecast the box office performance of the movie.