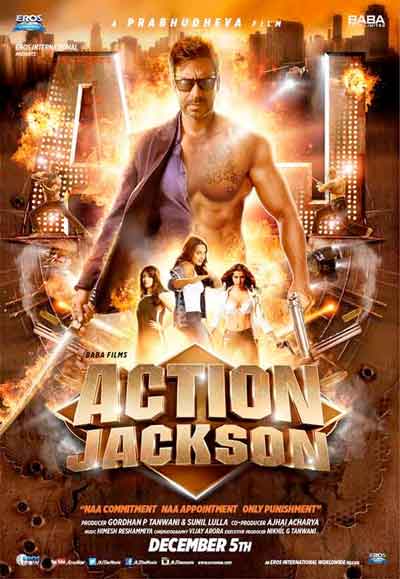 Promising to bring its audiences a complete package of entertainment, love, fun, masti and, obviously, loads of action, the new Bollywood entertainer Action Jackson or AJ stars the talented and versatile Ajay Devgann in a triple role. Well, Ajay Devgann is a plenty of intensity, drama and, if he tries, comedy, when playing just 1 character act in a film. And, when you treble that dose, and add the jhatkas and phatakas of two of the freshest faces of the contemporary Bollywood, you can be sure get an eclectic and amusing mix. The vivacious Sonakshi Sinha and the very pretty Yami Gautam comprise the female leads in this movie, directed by the ace-dancer Prabhu Deva. The movie, which claims to be a ‘hatke romance’, is rumoured to have the cameos by Prabhu Deva, Salman Khan and Shahid Kapoor, among others.

Will AJ really be able to strike a chord with the Hindi film viewers, who already seem to have had a very low dose of real entertainment in the last few months? Ganesha looks at the Release Time Chart of Action Jackson to predict the way ahead –

Good luck to the cast and crew of the film. May Lord Ganesha bless everyone.