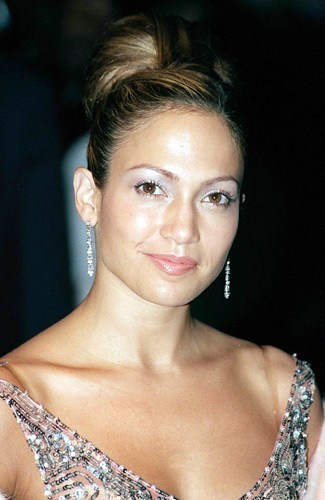 Jennifer Lopez, the name reminds us of many catchy songs and music videos. Highly acclaimed fashion designer Roberto Cavalli has confirmed that Jennifer is pregnant as she has been getting various dresses to cover her baby bump. Don’t worry, Roberto is not directly involved with Jennifer except for the design of costumes. Jennifer’s husband is Marc Anthony. Her fans would surely remember her song `No me ames (don’t love me)’ with Marc Anthony.

J-Lo is born with Virgo Ascendant as per Vedic Astrology. Her fifth house of child and related matter’s Lord Saturn is debilitated, thus weak in the 8th house of difficulties. In a horoscope, seventh house which denotes womb and conception related matters is occupied by a strong malefic planet Rahu (Moon’s north node). Her husband Marc Anthony has Stellium of Venus, Mercury, Sun, Uranus and Ketu in Virgo, which falls on Jennifer’s Ascendant. He is born with debilitated Saturn and Saturn is at Zero Degree so it’s in Aries Navmansha, thus it becomes Vargottami. Considering these factors, Ganesha finds both the horoscopes very weak to beget the child but denial is not foreseen because in J-Lo’s horoscope, Jupiter is aspecting the fifth house of offspring.

Many people in media and in general were unsure whether she is pregnant at present or not? So Ganesha checks a Prashna Kundli (Horary Chart) for the moment and the question is `Is Jennifer Lopez pregnant? Interestingly the thing is, in this Horary chart Moon is posited in the second house of family and related matters and Mars is aspecting the fifth house of children and sixth house of diseases too. Rahu is posited in the seventh house in this Leo Ascendant Vedic Prashna Kundli or Horary Chart.

Rahu’s involvement is major in Jennifer, Marc and the Horary chart too, hence this suspicion from media and lots of hype to the whole matter too. Ascendant and Descendant Lords of Horary Charts are in Sextile aspect with each other, this indicates that she is pregnant. As retrograde Uranus and Rahu the North Node which is always retrograde – both are placed in the seventh house of Prashna Kundli and Moon is in Virgo the interpretation can be something like this.

Jennifer is pregnant with Marc Anthony’s child but health may be cause of concern – with Moon in Virgo. Moreover, Rahu and Uranus both retrograde in the seventh house of womb, she may be pregnant through some unconventional ways. In other words, conception may not be biological. As Mars aspects fifth and sixth house in the Horary chart, and is also passing through the 10th house in her chart, aspecting the fifth house of progeny by its 8th aspect, delivery may not be normal but it will be through operation only.

Ganesha feels that Rahu’s presence in the seventh house of Horary Chart and also in her birth chart is indicting that she may continue keeping mum on this matter at least till 22nd November 2007 but after that media will be clearer about facts and figure both.

Ganesha specifically mentioned facts and `figure’ because there has been a rumour that she is carrying twins! So, matter is not very simple, in fact more complicated!! In her horoscope, Mercury the planet most responsible for twins is aspecting the fifth house so chances are there, that’s all can be said but according to her horoscope, there is hardly any chance of one child and even that cannot be biological child from Marc because his planets are also equally adverse for the matter.

Ganesha would like to throw some light on her Solar Return chart too. Ascendant of Solar Return chart is Cancer, which indicates that she will have gains during the current year. Positive sign is that retrograde Jupiter is placed with fallen Moon in the fifth house of progeny in SR (Solar Return) chart. Both the planets are Natural Benefic and devoid of any hard aspect in her SR chart, as per Vedic System. While considering Western Aspects, both the planets are squared by Rahu, Saturn, Venus and Ketu. Hence this matter is highly important and process may be difficult. Mars in the SR chart is in Aries, the fifth house Lord so that it’s a positive point for progeny and related matters but its position in the Bhav Chalit Chart is in 11th house so operation or some sort of medical treatment is necessary and likely. She might even have to undergo a small surgery before delivery due date. Moreover, this also indicates chances of premature childbirth. It is to be noted that Mars is the year Lord aspecting fifth house of progeny in Chalit Chart and Muntha (The Sensitive Point) is falling in the fifth house of progeny itself!

In her progressed chart (as per Vedic Astrology System) for the year 2007-2008, Rahu falls in the fifth house of progeny, opposed by Sun. Seventh house of womb is occupied by Debilitated Saturn and Moon. Fifth house is squared by Mars in Scorpio. There is no benefic aspect on the fifth house.

As per Vimshottari Dasha System, she is under the influence of Ketu major period and sub period of Saturn which will rule till 15th December 2007. After this, Mercury sub period will be ruling till 11th December 2008. Ketu and Saturn are in inconjunct aspect in her Natal chart which indicates difficulties related to pregnancy and related matters. At the same time, fifth house Lord Saturn’s sub period is ruling is indicative of pregnancy. Ketu (Moon’s south node) is a malefic but generally children born with Ketu’s strong influence are `blessed’, specifically when Ketu is in the Ascendant, they are born after some Pooja, Vidhi or blessings. It is to be noted that Jennifer has Ketu in the Ascendant and she would be delivering a baby under Ketu’s major period! Ganesha feels that she is really blessed in a way.

Considering all points discussed above, Ganesha feels that she can be pregnant through IVF or at least some other unconventional methods of conception but more light on this issue and her `issue’ can be expected only after November 22nd 2007. Lopez can be a bit scared as her doctors must have advised her that this is slightly difficult phase for her and looking at her age, this seems logical too. Astrologically speaking, the phase while Mars will be going retrograde in Gemini from 15th November 2007 to almost January 2008 end, J Lo will have to take enough care of hear health and presumed baby’s health too, otherwise there can be miscarriage or some misfortune too. May God bless the couple with a child but with magnifying glasses and astrological eyes, Ganesha finds this to be slightly painful pregnancy for Lopez.

However, Ganesha’s best wishes are with her. May we hear the good news from the `horse’s mouth’ soon.

Good luck and may Lord Ganesha bless J Lo and Marc with beautiful child (or children?)