Find out why Ganesha gives just 2.0 Laddoos to ‘Housefull 3′ in his astrological preview! 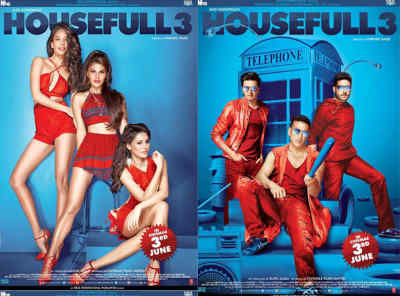 The 3rd Installment in the Housefull franchise – starring Akshay Kumar, Abhishek Bachchan, Riteish Deshmukh, Jacqueline Fernandez, Nargis Fakhri and Lisa Haydon, will be hitting the big screen on the 3rd June, 2016. Find out how the much anticipated film may fare at the Box Office with the help of Ganesha’s predictions!

1) Will ‘Housefull 3’ prove to be India’s Best Comedy Movie till date?

2) Will this film break the Box Office collection records?

3) Will the trio of Akshay Kumar, Ritesh Deshmukh & Abhishek Bachchan be successful?

Ganesha’s Ladoos Rating** {of the available planetary support for the film2.0 LadoosGanesha wishes good luck to the cast and crew of the film ‘Housefull 3’.

** The Ganesha’s Ladoos Rating is NOT same as a regular Film Review Rating. Ladoos Rating is a part of the film Prediction, and, unlike regular film reviews it is calculated Astrologically, before a film’s release/ viewing. Ladoos are Lord Ganesha’s favourite sweetmeat/ Indian mithai.*** 5 Ladoos – Awesome; 4.5 – Sumptuous; 4 – Delicious; 3.5 – Very Tasty; 3- Tasty; 2.5 – Fairly Average; 2 – Just about Okay; 1.5 – Passable; 1 – Uh!; 0.5 – No!; 0 – No Comments…Disclaimer : The Ladoos Rating is not meant to be a critical review or appreciation of any film, i.e. typically done after its release. Ladoos Rating is only intended to be a fair indication of the available planetary support for a film, basis the Chart cast for its Release Time, which, in turn, is meant to Astrologically forecast the box office performance of the movie.