Will the stars pose as hurdles in Holiday’s path to filmdom glory? Probes Ganesha. 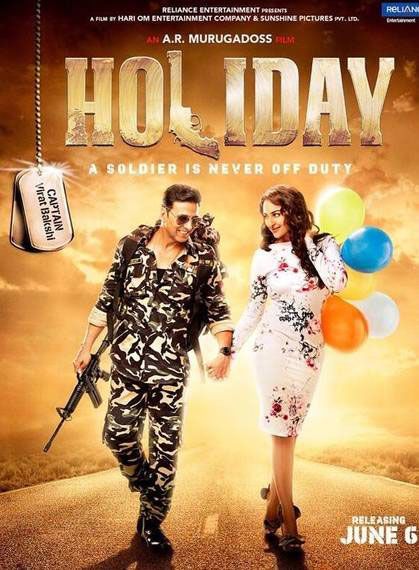 Directed by A. R Murugadoss, Holiday – A Soldier Is Never Off Duty, is the remake of the Tamil blockbuster Thuppakki. This action packed film is about a military officer Virat Bakshi – Akshay Kumar, who returns home on a vacation. He meets and falls in love with a beautiful lady, who happens to be a boxer, Sonakshi Sinha. Akshay is also a secret Defence Intelligence Agent. However, as a soldier cannot be off duty, he is now assigned the task of hunting terrorists inside his city, who plan to activate the sleeper cells. Being a patriot, Virat destroys the terrorist gang, and saves the city by deactivating the Sleeper cells. The soft, melodious, and trendy music of the film is composed by Pritam, and Irshad Kamil’s lyrics are very heart warming. This thriller movie ends with a dedication to the Indian Army.

Well, that’s what we can give away off the movie as of now? But, will the movie be worth a watch? Will the audiences queue up to see the Akshay-Sonakshi hit pair yet again? And, will the always-young lean machine Akshay manage to capture the audiences’ minds and hearts? Ganesha takes a look at the film’s release time chart to predict the way ahead.

Summarily, Ganesha feels that ‘Holiday’ is going to do better than average at the box office. However, even though it may have the block-buster material, it is not fated to be a super duper hit movie.