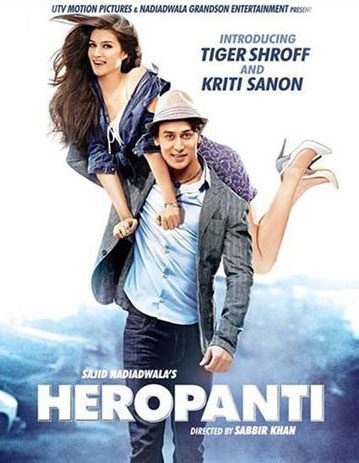 Tiger Shroff, Jackie Shorff’s son, and model Kriti Sanon shall make their Bollywood debut with Sajid Nadiadwala’s action packed Heropanti; remake of the Telugu film Parugu. Directed by Sabbir Khan, this romantic movie also highlights certain social issues – but on the whole, the movie is about the dashing youth of the current age, who believes in love; and not in caste and social status. This love story includes the clash between the principles adopted by today’s generation; and the culture followed by people of the bygone era.

Foot-tapping music by Sajid-Wajid coupled with catchy lyrics have taken Heropanti to the top of music charts – Whistle Baja deserves a special mention here. A melodious flute tune in the form of a whistle, a superb remix of Hero’s signature tune, is an instant hit. But will it all turn into a box-office hit? Ganesha finds out.

Ganesha wishes good luck to the cast and the crew of this movie.