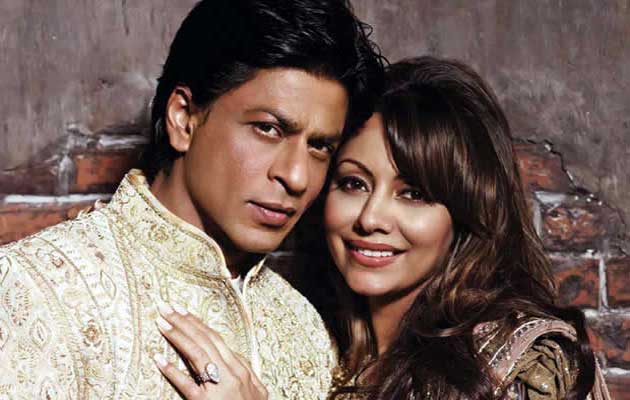 Graceful and talented Gauri Khan probably has never believed in just being the arm candy to his super-famous husband. Striving to carve a niche for her own self, rather than bask in SRK’s scintillating glory, the imposing and august Mrs. Khan has donned many a hat, from sitting put in film-producer’s chair to walking the ramp to hosting a TV show in the late 90’s. Co-founder to film production and distribution company Red Chillies Entertainment, along with husband Shahrukh Khan, Gauri has produced several blockbuster films including the recent Chennai Express and Happy New Year. Mesmerizing as Vogue’s cover-girl in 2008 that got her dubbed as the First Lady of Bollywood and dextrous as an interior designer, Gauri Khan, as arresting as a fashion line’s face as the brand ambassador to an interiors’ line, has never seemed to rest on the rock of her fortunate, golden life. Recently, the confident diva added another feather to her cap, as she showcased her self-designed fashion line, named ‘A Tropical Wonder’ in association with Satya Paul in the Lakme India Fashion Week to a glittering response. The line comprises of sarees and dresses in summer, tropical, fruity colours and prints was endorsed by many celebrities.

Ganesha takes this as an opportunity to look at trendy Mrs. Khan’s Solar Horoscope to predict the way ahead for her as a creative designer.

Gauri Khan – the person behind the enigma…
Born with the exalted Sun and Mercury, Gauri has been gifted with plenty of intelligence by the stars. Her logical and analytical ability are also likely to be a definite plus. Given the presence of Venus in Libra in her Chart, it is also likely that Mrs. Khan is naturally creative and innovative. In her Solar Chart, Jupiter is associated with Venus, which bestows her with a potential to be successful and commanding in a ‘ directorial position’. She can do well in an authoritative position in a creative endeavour or a venture/ organization of the same nature. Ganesha feels that her commercial instincts will be powerful, and she will be a very practical and grounded person.

As a fashion designer…
Ganesha feels that Gauri Khan’s Solar Horoscope is indicative that she can do pretty well as a designer and a fashion creative person, as Venus is placed along with Jupiter in her Solar Chart. Venus, the signifier of creativity and luxury, thus, mingles happily with Jupiter, the signifier of higher thinking and knowledge.

However, in the light of the transiting planets, Ganesha feels that Gauri will need to work pretty hard to consolidate her position in this sector – till, at least, January 2016 – as by then, Rahu shall be transiting over Gauri’s Natal Sun and Mercury. Even if she doesn’t see much encouragement during some phases till January 2016, she will have to remain firm on her decision to not ‘give up’ in her pursuit of her a successful career as a fashion designer.

Overall, given Gauri Khan sticks put to her desired goal, it is likely that she will be successful, even though her initial run may make her work pretty hard.

Gauri Khan is cut out to be –
a creative person. Stars in Gauri Khan’s Solar Chart confirm that she will do well in creative areas, and they shall remain her focus area in the times to come. Her Chart also confirms that she is gifted with enough instinct, dexterity and logic to continue to do well as a film and television producer.

In distant future, she is also likely to foray in the field of health-care, and may also be involved actively in a noble cause. An event management company and an import-export business or something related – are other areas, which Mrs. Khan can explore with good success.

Please take care….
Between January 2016 and July 2017, the transiting Rahu will be moving over Mrs. Khan’s Natal Mars and Ketu – as per her Solar Horoscope. During that period, stresses Ganesha, she will have to be extremely careful. Possibility of an injury or a health issue in this time cannot be ruled out. Or, she may remain stressed, owing to various reasons, in the said period.