Ganesha’s wishes on the birthday of Masiela Lusha 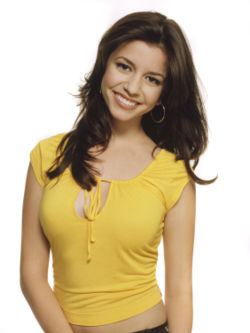 Masiela Lusha (born October 23, 1985), is a Tirana Albanian-born actress and writer. She was born in Tirana, Albania and her family moved to the United States when she was seven.

At the age of twelve, Lusha published a book of her poetry written in both Albanian and English. She became an actress and played Carmen Lopez in the first five seasons of ABC’s The George Lopez Show, and does the voice of Adrian in Adrian Butler from 2003 to the present. Her character on the show also writes poetry; however, unlike her character, she is not Latina. Masiela Lusha has also appeared in the films Summoning and Cherry Bomb.

She has Aquarius Moon Sign with placement of Saturn in 10th house. Rahu is deposited in 3rd house. Jupiter, Venus, and Sun are debilitated. Looking at her Solar return chart, Ganesha feels that the upcoming year shall be more beneficial than previous one. Due to the transit of Mars, she is likely to exert her energy and initiative in actively pursuing a rewarding love-life. She may have competitive environment till mid of 2008. She shall have better health during the upcoming year. Ganesha advises her to wear white clothes every Monday to strengthen Natal Moon. She may find better luck and enhanced fortune because of the transit of Jupiter. Development and gain can be expected. But on the other hand, Saturn and Ketu will be transiting through her 7th house. Ketu will leave 7th house on April 30, 2008. Due to this placement of two major planets, there may be a danger of trouble and loss through public or partner’s opposition, damaged relationships. She should wear Crystal wristlet and ornament till the end of April 2008, says Ganesha.

Ganesha wishes her a very happy and delightful birthday. May God grant all her wishes!