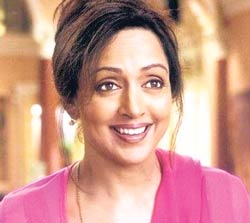 The famous Bharatnatyam dancer, Bollywood diva and the original dream girl of Bollywood, Hema Malini  is celebrating her 57th Birthday today (16th October). She has given many hit films like Johnny Mera Naam, Tere Mere Sapne, Seeta Aur Geeta, Trishul, Satte Pe Satta..the most popular being Sholay.  The list is endless and so is her popularity. She suddenly disappeared from the industry after her marriage to Garam Dharam (Dharmendra) only to return after a long period of time in Baghban and Veer Zaara opposite Amitabh Bachchan. She also tried her hand at direction with Dil Aashna Hai but the film did not make any mark on the silver screen. She is also involved in politics as a member of Bhartiya Janta Party. Ganesha analyses her horoscope and finds out what lies in store for her this year.

Even at her age, the gorgeous actress is busy on many different fronts – politics, acting, social work and homely commitments. And she is raring to do more. The dream girl was born on 16th October 1948 in Trichur located in Tamil Nadu. She began her acting career in Hindi films in 1968 with Raj Kapoor’s film Sapno Ka Saudagar while she was under the influence of sub period of Venus (Venus denotes art and drama) and major period of Mercury. Because of that besides acting in movies, she has also been a trained Bharat Natyam danseuse and has given many performances in India and worldwide. She was awarded the ‘Padma Bhushan’ in 1999 for her contribution to Indian Cinema. In the Antardash of Jupiter in Venus Mahadasha In 2003 she was nominated in the Rajya Sabha (Parliament of India), serving on the Committee of External Affairs as an MP. In 2004, actress-turned-politician Hema formally joined the BJP (Bhartiya Janata Party). She served as the Chairperson of the National Film Development Corporation (NFDC) from 2000 to 2003. Ganesha notes that 5th house of arts as well as drama is occupied by Yogakaraka Mars. Therefore, she is a good dancer as well as actress. Owing to transiting Jupiter’s movement over the Natal Jupiter and transiting Saturn’s passing over the Natal Saturn, next year is encouraging for her on the subject of politics. Ganesha feels that her next year would be beneficial. She will get more success in politics in the coming year. Swagruhi Jupiter denotes service and charity. For this reason, she announced that she would donate her eyes and urged others to think seriously about the blind. Taking into consideration the strong Jupiter along with Mars, she will donate and will make available help for the deprived and needy people in future.

May Lord Ganesha make her career bright- be it in politics or in films!