Ganesha wishes desi girl and predicts her year ahead 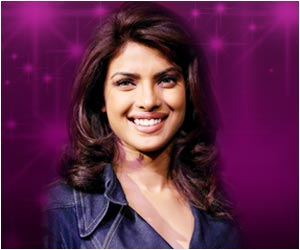 ‘Growing up and that too with grace’, is a phrase one can aptly relate to our very own ‘desi’ girl Priyanka Chopra who turns 28 on 18th July, 2010. After winning the prestigious Miss World title in the year 2000, ‘Piggy Chops’ easily and coolly made her way into the planet Bollywood. Today, counted as one among the Bollywood’s leading ladies, Priyanka has managed to gain an undeniable place among a large chunk of audience. Mesmerizing fans for over a decade, she has won awards for her spectacular performances in films like Andaaz and Aitraaz. And, then last year for Fashion she bagged the coveted National Film Award for best actress. She is the first and only actress in the world to portray 12 characters in a single film, ‘What’s your Rashee?’. This may even give her entry into the Guinness Book of World Records. Recently, the actress was in news for visiting the Twitter Headquarters when she crossed a record of two lakh virtual followers. This year, her fans are definitely going to enjoy a lot more of her, not only on big screen, but also on the small screen. She will be hosting the next season of the famed adventure show – ‘Khatron Ke Khiladi’.

Films, fitness and followers on twitter, she has it all. What’s more in store for Priyanka Chopra this year? Ganesha finds out on her birthday with the help of Vedic Astrology.

Remedy:
Ganesha suggests she performs the following remedial action in order to tone down the malefic effects of transiting planets in her natal chart:

She is advised to get the “Nava Chandi Pooja” done by any proficient Brahmin.