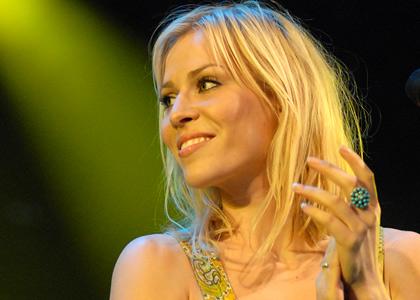 Natasha Anne Bedingfield (born 26 November 1981) is an English singer and songwriter. She made her debut in the 1990s as a member of the Christian dance/ Electronic group The DNA algorithm. Ganesha analysis her horoscope and predicts her health, career and other aaspects.

She recorded her first album Unwritten in 2004 during the transit of Jupiter over Saturn. The album contained primarily up-tempo pop songs and was influenced by R&B music; it enjoyed international success with over 2.5 million sold worldwide. In 2007, she received a Grammy Award nomination for “Best Female Pop Vocal Performance” once again during the transit of Jupiter over Natal Jupiter.

In November 2006, Bedingfield released the DVD Live in New York City, which contained a live concert performance as well as music videos and a documentary. She has vargottam Venus posited in second house by which she earns by the occupation of Venus.

Year 2007 has remained very beneficial for her. Jupiter, being lord of second house was transiting over Natal Sun, Moon, and Mercury. On October 3, 2007 Bedingfield won an award for “Best Pop Artist” at the 2007 BT Digital Music Awards.

Ganesha Feels that Mars, being lord of sixth house is transiting from eighth house can harm her health. On the other hand, Transiting Saturn and Ketu are passing over Natal Mars. These positions are also very disappointing. Saturn has a powerful and life altering influence. While the sixth house rules work, the tenth house rules the work that you identify with. At work, she may have the desire to lead or guide co-workers. This might not always work for her. Rahu is also transiting from fourth house. Ganesha advises her not to deal with any kind of tangible or intangible assets. She may loose or may have to suffer losses. But very significant transit in her chart is transit of Jupiter over Yogakaraka Planet Venus. With Jupiter in the Second House she will find luck, ease of working and general good fortune coming through successful and hugely profitable business ventures that increases personal wealth and property because of its aspect in tenth hose. This placing of Jupiter increases the chances for personal success, fortune and general prosperity. It inclines to government and responsible business affairs and tends to bring gain through law, insurance, banking, religion, education, and literature.

Ganesha wishes all the good for Bedingfield and also blesses her with the courage she need to deal with the predicted adverse situation.