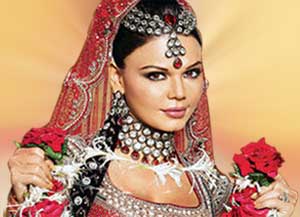 Rakhi Sawant likes it big. No, we are not talking about her big mouth. Our reference to her affinity for all-things-grand is about her new avatar on the idiot box: A reality show, Rakhi Ka Swayamvar, in which she is on a quest to find her perfect mate.The show, which started on 29th June, 2009, has 16 ‘well-endowed’ men fighting it out for the woman of their dreams. The saga of romance, heartbreak and, finally, marital bliss has unravelled in the splendid Fatehgarh Palace in Udaipur.

Ganesha analyses whether this show will be as sensational as Rakhi Sawant or will the modern-day Draupadi attract public ridicule?

Chart of the first episode of Rakhi Ka Swayamvar

Ganesha wishes good luck to Rakhi Sawant and the show.