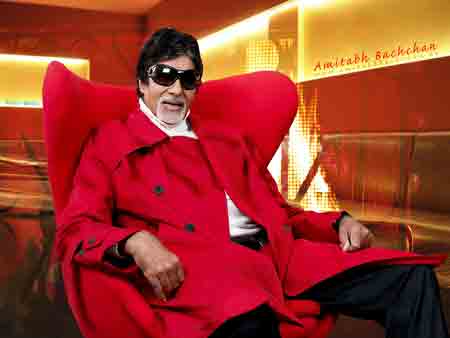 A living legend who has god-like status among Indian film enthusiasts, Amitabh Bachchan, even at 66, continues to be the most bankable celebrity in the country. After his extraordinary stint as host of reality game show Kaun Banega Crorepati four years ago, he is all set to make an imposing comeback to the small screen.

This time, he will be playing host to a number of celebrities in the third season of the controversial reality show Bigg Boss. And Bachchan being Bachchan, he’ll be taking home a whopping Rs. 2.25 crore per episode, adding his total earnings from Bigg Boss 3 to a mind-boggling Rs. 40 crore!

Is Big B a fitting replacement for the svelte and sexy Shilpa Shetty? Will he be able to reduce the screen goddess’s presence on Bigg Boss to a dim memory? Let’s find out what Ganesha, the big boss of Astrology, has to say about this:

Astro Analysis
Transiting Saturn is posited in the 8th House and is aspecting Pisces. Pisces, posited in the 2nd House of Amitabh’s natal chart, will allow him make his presence felt on the small screen. Amitabh’s show will appeal to the masses, and will attract viewers from across the world, says Ganesha.

Though the actor will be low on confidence, Bigg Boss 3 will gradually attract audience, as natal Sun will be transiting through the 8th House in Bachchan’s chart.

The superstar will be under the influence of the first phase of Sade Sati after 5th October, which may usher in favourable changes in his life.

Jupiter is posited in the 6th House. Moreover, Mars will transit through the 6th House, which indicates that the show will be successful, but can get embroiled in a lot of controversies.

After 19th December, Jupiter will be transiting through the 1st House and will be aspecting Moon, posited in the 9th House. It will be a completely new experience for Amitabh, as transiting Jupiter will provide strength to Moon during this period.

Jupiter, being the Lord of the 2nd House (of speech) and the 11th House, will transit through the 12th and the 3rd Houses respectively from its own House. Under these favourable transits, Big B will gain more popularity, and the show will surpass its last season’s TRP ratings.

Venus, Mercury, Mars and Sun are posited in the 8th House. Moreover, Saturn and Sun will be transiting through the 8th House. During this period, Amitabh’s health could be a matter of concern.