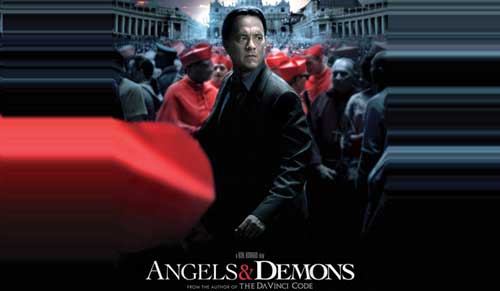 Not many knew Dan Brown till his book The Da Vinci Code was released. An instant bestseller, it created an uproar in the Christian world, whipping up a storm of debate, denial and disbelief. Among other things it did, Da Vinci also changed the meaning of the term 'sacred'.

Though its film version - starring Hollywood hunk Tom Hanks as symbologist Robert Langdon, and French actor Audrey Tautou - was equally criticised by sceptics, it did good business at the Box Office.

Angels & Demons, Brown's little-known work written before Da Vinci, gathered steam in the aftermath of Da Vinci's success and was lapped up by fans across the globe. It was in Angels & Demons that Langdon was first introduced as the Harvard University symbologist who tries to uncover the mystery of the Illuminati - a secret society aiming to decimate Vatican City. Like Da Vinci, the tussle between science and religion provides the impetus to Angels & Demons as well.

And now, Tom Hanks is back in the role of Langdon with a new leading lady, Ayelet Zurer, in the film adaptation of Angels, which releases in India on 29th May. Ganesha decodes the fate of this new mystery  thriller directed by acclaimed film maker Ron Howard, and predicts how it will fare at the Box Office.

Astrological points to be noted


Fate of Angels at the Box Office


In short, Angles & Demons may do well in India, but its business may not remain consistent despite it being a good film.

Ganesha wishes good luck to the team of Angels & Demons!